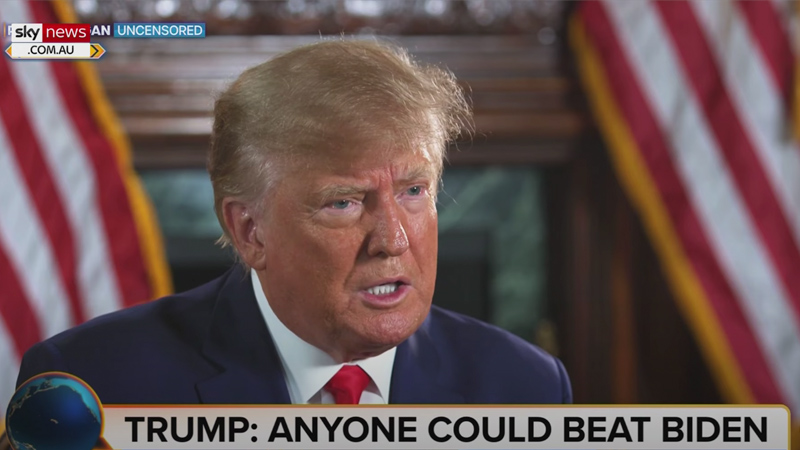 Former US President Donald Trump sat down for a wide-ranging interview with Sky News broadcaster Piers Morgan, discussing everything from the war in Ukraine to his possible attempt at a second term in office.

Addressing his possible presidential ambitions and his predecessor Joe Biden, Trump said he couldn’t yet disclose whether he’ll run again, but said “America is going to hell” under Biden’s lack of leadership.

“Because of campaign finance and everything, I’m not allowed to say, but let me just say this, I think a lot of people are going to be very happy,” Trump responded, adding, “I love our country. Our country is going to hell.”

Asked whether more of the same could be expected under a new Trump presidency, Trump said it couldn’t be worse than the current situation where incompetent people are running the show, posing a real threat to humanity.

Trump added that incompetent leadership could lead to nuclear war with Russia.

Trump continued to assail the Biden administration over the bungled Afghanistan withdrawal which left many US citizens stranded in the country after the US military withdrew its forces.

“I think the Afghanistan withdrawal was so incompetent – with the $85 billion and the dead soldiers,” Trump said. “I have never seen anything so incompetent.”

Trump went on to say the withdrawal signaled US weakness and likely encouraged Russian President Vladimir Putin’s invasion of Ukraine, which he said would not have happened under his watch – even though he initially called Putin’s troop build-up a “brilliant move.”

“When he built up soldiers on the border I said, ‘That’s very smart, brilliant move,’ because I thought he was negotiating. When he went in, I said, ‘No longer a brilliant move.’”

Trump also recalled a conversation he had with former German Chancellor Angela Merkel where he criticized her over her country’s heavy reliance on Russian energy.

Discussing how he delivered Merkel a “very luxurious napkin” meant to represent the white flag of surrender, Trump told the German leader to keep it for later use when she finds herself at the mercy of Russian energy.

PBS Admits Trump Would Have Avoided War In Ukraine