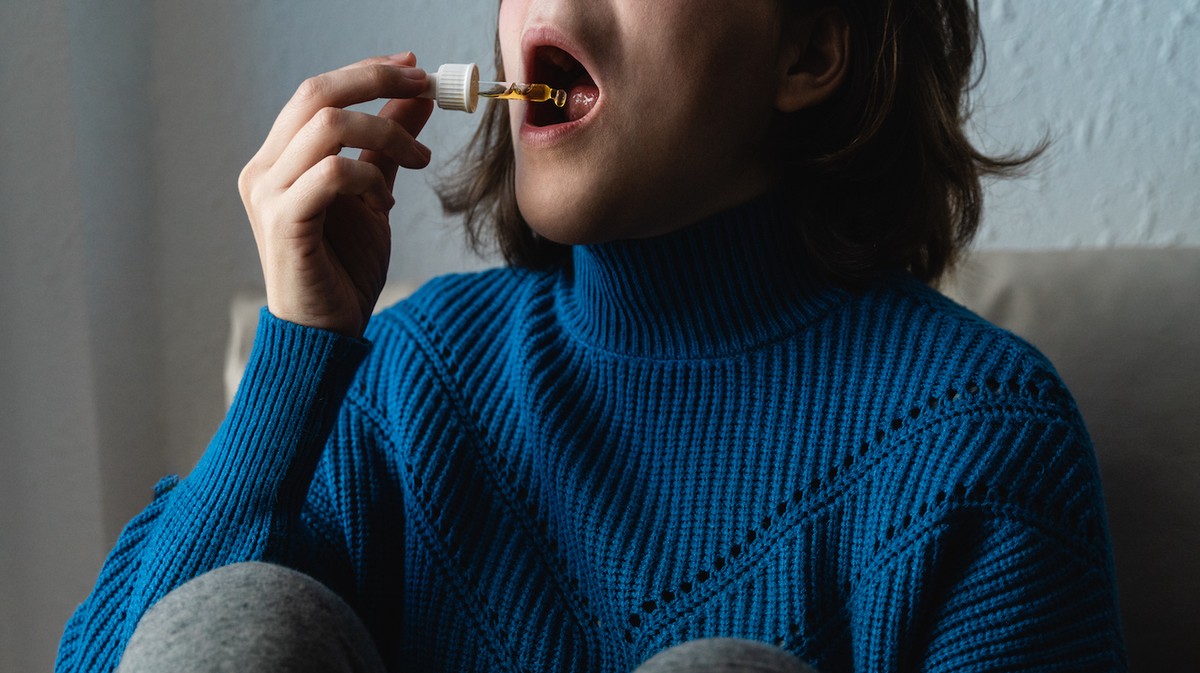 Andrew Vass had been suffering the “torturous” effects of long COVID for about a year before his doctor gave him some weed. Specifically, an oil-form of medicinal cannabis containing 5 percent cannabidiol (CBD) and 0.2 percent tetrahydrocannabinol (THC). The effect, he says, was immediate.

Vass, a 42-year-old financial services worker from London, had only used cannabis twice in his life, and both times it gave him “outrageous” migraine headaches. He was desperate, but sceptical.

“It just wasn’t what I was expecting, and I never really considered it as a treatment,” he told VICE World News. “So [the doctor and I] spoke about it multiple times, and I think it was about the third time I eventually relented and said, ‘OK, fine, let’s try it.’”

Now he describes it as a “game changer.”

“Long COVID’s really cost me a lot in terms of what I want to do with myself,” he said. “[But] I never experienced any issues post the introduction of the pot. For me, it was a marker that allowed me to actually put all the physiological symptoms largely behind me and move on.”

Vass is one of the first people to have taken part in a pioneering trial in the UK examining the therapeutic benefits of medicinal cannabis for treating post-acute sequelae of COVID-19, or long COVID. The mechanism of the illness—which is estimated to affect about 10 to 30 percent of people who get COVID, tens of millions of individuals—remains unknown.

The symptoms, for which there are currently no evidence-based treatment options, run the gamut of ongoing fatigue, headaches, shortness of breath, muscle weakness, fever and cognitive dysfunction, or “brain fog.” Anyone experiencing such symptoms for longer than 12 weeks is considered a COVID “long-hauler”.

It was a month after being infected with the virus in March 2020 that Vass noticed he had ongoing respiratory issues, and another two months before he started suffering insomnia. He went from sleeping eight hours a night to no more than two. Then he developed acid reflux and started having asthma attacks.

Around September he started experiencing fasciculations—when a muscle spasms and contracts at random—and later that month he had his first post-viral crash.

“I was a fairly active individual pre-COVID, doing a lot of fitness classes and things like that, and I decided to do a really simple core workout on a Sunday because it felt like I hadn’t done any exercise for a long time,” he explained.

“On Monday morning I could barely get out of bed. My legs felt like concrete. My shower was about a four metre walk from the bed, I could barely make that, and I would get into the shower and just kind of squat under it.

“I didn’t leave the house for six days, and eventually dragged myself out.”

All of these symptoms continued until December 2020, when a doctor in the UK prescribed Vass the antidepressant amitriptyline to help with his sleep. It worked, but he had little interest in having to use synthetic pharmaceutical medications long term. It wasn’t until he met Dr Anjali Didi, a general practitioner from Australia, that he was finally offered the cannabis treatment.

Now, every night before bed, he pulls 0.1 millilitre of dark green cannabis oil into a syringe and puts it under his tongue. He’s usually asleep within 30 minutes of taking it.

“I don’t take any [other] drugs anymore, other than for my reflux,” he said. For the foreseeable future, he added, he will continue using cannabis.

Earlier this month, the UK’s NHS Research Ethics Committee (NHS REC) and Medicines and Healthcare products Regulatory agency (MHRA) announced that they had approved one of the world’s first scientific studies to test the benefits of cannabis for patients suffering long COVID. The study, led by drugs advisory committee NGO Drug Science, will run for six months and involve 30 participants who have been diagnosed with the debilitating condition.

Each participant in the trial will be prescribed daily doses of a non-psychoactive cannabis oil medicine known as Medicabilis, developed by the pharmaceutical company BOD Australia who is commissioning the study. Participants will be required to give daily self-reports, assessing recognised long COVID symptoms, and all of that data will then be analysed by researchers to determine the treatment’s efficacy. If the findings show promise, research will be upsized to a large-scale randomised control trial involving many patients across the UK.

“We need to address long COVID and quickly,” David Badcock, chief executive of Drug Science, said in a statement to VICE World News. “Research will lead us to the most effective options and this includes looking at medicines like cannabis which, while legal in the UK since 2019, are still widely misunderstood and rarely prescribed.”

Scientists have been proposing cannabis as “an important therapeutic plant against post-COVID symptoms” since a study published in the Journal of Biomolecular Structure and Dynamics in April 2021 found that the cannabinoids CBD and Cannabivarin (CVN) can “be beneficial in post-COVID symptoms treatment strategy.”

That isn’t to say that smoking a joint or popping an edible will cure a person of COVID, or prevent them from catching it in the first place. Certain cannabis-derived treatments might—but as a June 2021 article in Psychology Today pointed out, “much more research is required in order to prove the effectiveness of these cannabinoids.”

“From my experience of prescribing cannabis to patients with diseases affecting multiple bodily systems and presenting with many different symptoms, there is potential that medical cannabis could also be effective as part of the management of patients with long COVID.”

Medicabilis is not the only product to be looked at with this goal in mind.

In November 2021, the Heart Institute of the São Paulo University Medical School, InCor, announced that they would be conducting a clinical study into medicinal cannabis as a treatment for long COVID, using a pharmaceutical-grade CBD extract produced by cannabis company Verdemed.

In a double-blind trial, the researchers in Brazil will explore whether the cannabis product can improve the quality of life for COVID long-haulers. They expect to have arrived at some kind of answer to that question by April.

“Based on epidemiological data, it has been proposed that long-haul COVID syndrome will be the next public-health disaster,” Dr Edimar Bocchi, who is leading the trial, told Latin American Business Stories. “This is a very important study, because CBD has never been tested for this purpose.”

Dr Elizabeth Iveson, a Neurorehabilitation Consultant based at STEPS Rehabilitation Unit in Sheffield and the principal investigator on the UK study, shares Bocchi’s concerns. She told VICE World News that she’s “seeing more patients significantly affected by the prolonged after effects of long COVID”—many of them young, previously fit and healthy individuals like Vass, who now struggle daily with mobility, fatigue and anxiety.

Iveson said there is an urgent need for more clinical trials on medical cannabis’ effects on long COVID.

“From my experience of prescribing cannabis to patients with diseases affecting multiple bodily systems and presenting with many different symptoms, there is potential that medical cannabis could also be effective as part of the management of patients with long COVID,” said Iveson.

“[But] access to these medicines for patients is still limited and expensive.”

Iveson has seen firsthand the potential of medicinal cannabis for people suffering conditions with many of the same symptoms of long COVID. Her first cannabis patient in the U.K, Kyle Esplin, was living his dream life before he was struck down by a disease known as post-viral fatigue.

“I had a house in Majorca, I was travelling the world doing headline shows on a lot of cruise ships—I had a great life,” Esplin, a 40-year-old musician and entertainer from the Scottish town of Forfar, told VICE World News.

Then, in 2012, he contracted a respiratory viral infection and rapidly deteriorated until, six months later, he was bedbound. Walking for more than a few minutes at a time often precipitated something called post-exertional malaise—a worsening of symptoms following minor physical exertion, like that experienced by Vass—which “makes it very difficult to make progress to recover, and also makes it very difficult to plan anything in the day.”

“The doctors had no solution,” he recalled. “If I hadn’t taken cannabis oil, which changed my health, I don’t believe I would have gotten back to the level of functionality and physical fitness I have.”

Like Vass, Esplin had tried and explored a raft of treatment options, to little avail, before finally discovering medicinal cannabis. Like Vass, he noticed the effects within a week.

“It’s like [the cannabis treatment] turned down the volume on all the symptoms and I was able to progress,” said Epslin. “To get a bit stronger; to not have that crazy relapse after two minutes of walking.”

“It’s effectively given me my life back. Not quite the same as what it was, maybe 90 or 95 percent, but I’ll take that post-COVID. And if people get the same outcome that I have, then I think that’s a fantastic result.”

Although there is scarce research specifically investigating the potential of CBD oil as a treatment for chronic fatigue syndrome (CFS)—the most commonly used term to specify a group of medical disorders including post-viral fatigue and others similar to long COVID—studies suggest that cannabis shows efficacy in alleviating associated symptoms.

A 2016 review found evidence that cannabis-based treatments are effective against migraines and fibromyalgia, which manifests as muscle pain and in many cases fatigue. One 2017 study found that CBD can help treat hypersensitive central nervous systems, while another indicated that it lessens oxidative stress and diminishes mitochondrial dysfunction, which manifests as energy problems and muscle weakness. A 2009 study also suggested that CBD can be used to combat inflammation and help maintain homeostasis in the body.

Now Epslin takes medical cannabis every day, and plans to continue doing so for the rest of his life.

“I’ve never actually gotten sick in a bad way with any cold or flu or anything since I’ve been taking the cannabis as medicine,” he said.

When asked what kind of impact the treatment has had on his life, he became emotional.

“It’s hard to put into words,” he said, his voice breaking. “I can’t imagine the life I would have without it. I wouldn’t have made the recovery I made, and I just wouldn’t have gone back to being able to do all the things in life I love and enjoy. And I got more than 90 percent of them back. I consider myself very fortunate.”

It’s difficult, he elaborated, because he knows how much others are suffering—and remembers how difficult it was to get reliable information or professional medical help.

This, Vass said, was one of the hardest things: the feeling that he wasn’t being taken seriously or being offered meaningful help for a condition that so few medical professionals knew how to diagnose or treat.

“Long COVID wasn’t a thing, and in my personal experience at that point in time there was a real struggle to get the medical community to actually believe that you had something wrong,” he explained. “It’s widely understood that it occurs now, but it just challenges you in so many different ways when you go and see a medical practitioner and are told everything’s fine when you know it’s not. You really begin to doubt yourself.”

“The use of the pot—not just the physical side of it, but the mental aspect—helped me start to rebuild myself.”

Vass and Esplin are both optimistic that the treatment will work for others as it has for them, and hope the UK trial results demonstrate that on a larger scale.

“It’s effectively given me my life back,” said Vass. “Not quite the same as what it was, maybe 90 or 95 percent, but I’ll take that post-COVID. And if people get the same outcome that I have, then I think that’s a fantastic result.”