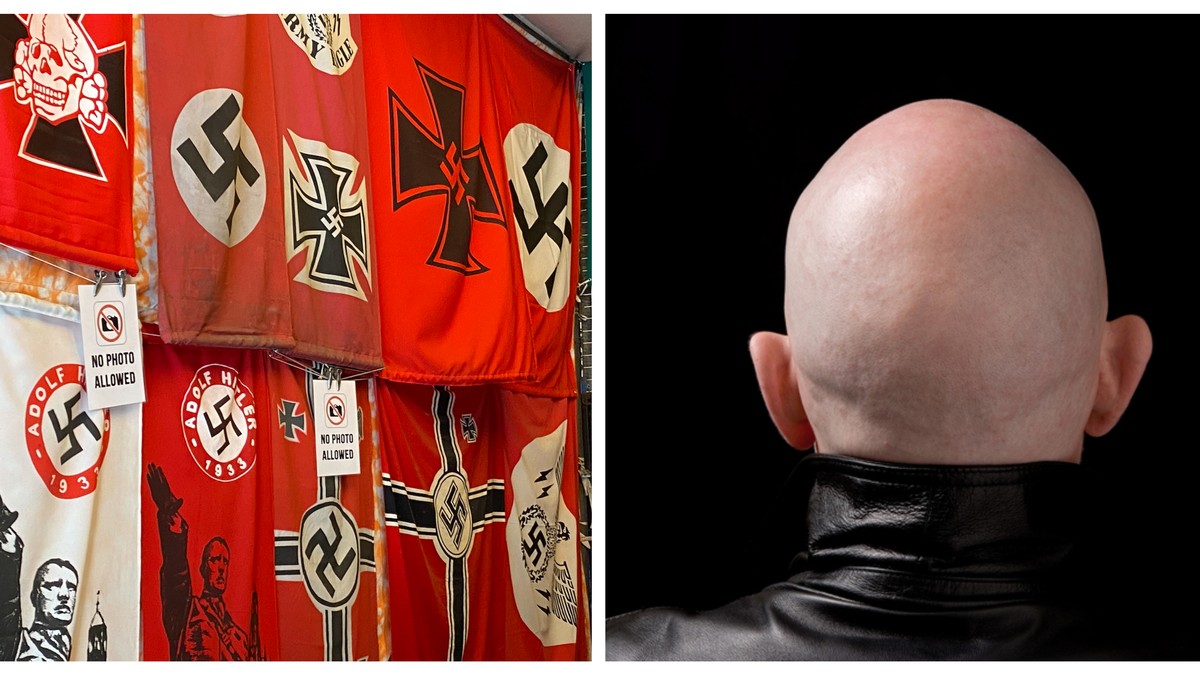 At first glance, it looks like any other souvenir stall in the labyrinth that is Bangkok’s sprawling Chatuchak market. Gaudy trinkets and rusty amulets, tacky Thai elephant pants, Muay Thai shorts and rip-off Premier League jerseys.

But step inside and you’ll see a darker side. Military flags and banners of the Third Reich, rusted replicas of SS daggers and switchblade knives, T-shirts bearing images of Adolf Hitler and white supremacist skinhead symbols, bundles of embroidered red-and-black swastika patches and armbands.

In pre-pandemic times, the sight of Nazi memorabilia was one that drew the attention—and occasionally anger—of the thousands of tourists who once passed through this major Bangkok market each year.

A Nazi emblem for sale at a market in Bangkok. Photo: Lillian SUWANRUMPHA / AFP

Now tourists have slowed to a trickle, but the shop’s owner Ton is well aware of the risks of continuing to sell the merchandise that he does in 2021. He references past incidents of Thai artists and shop owners who have made global headlines in recents year for selling and promoting Nazi-themed items.

“We still have to be careful because people, especially foreigners from European countries, will get angry and sensitive and might report us to the embassies, and we don’t want that to happen,” he told VICE World News. “It will be bad for business.”

But on the whole, Ton and two other local businessmen who run the store continue to enjoy a low-key existence these days as they openly trade in fascist iconography.

“We only entertain serious customers,” said Ton, as he readies a bulk order for an anonymous buyer in Japan. Like many Thais, he goes by a playful nickname. “Thailand is still one of the few places in the world where you can buy Nazi objects freely and legally, and not be judged.”

“Thailand is still one of the few places in the world where you can buy Nazi objects freely and legally, and not be judged.”

As he fills out a lengthy order sheet, he chats about doing business with private collectors from countries like the U.S., Canada and Ukraine, and even counts scandalous shock rocker Marilyn Manson, known for his affection for Nazi objects, among his clientele.

Manson, who’s currently embroiled in a series of sexual assault and domestic violence allegations, did not make the trips to the shop himself, Ton says. Instead, assistants, friends and female contacts of his did.

“They were big spenders,” Ton said. “They would show us his picture and buy accessories, small items like switchblade knives on behalf of him and tell us it was for fans at his concerts and shows.”

While some may be surprised the trade continues despite repeated controversies, Thailand’s interest and relative tolerance for Nazi imagery is well known. Critics attribute this to ignorance and a misplaced fascination with fascist regimes. Cases of Nazi-themed parades and displays, product branding, and even school events have been reported over the years, making headlines and sparking international outrage.

Some of the most controversial instances include a Thai pop star who wore a Nazi t-shirt featuring swastikas during a live TV performance only days before Holocaust Remembrance Day in 2019, and a propaganda film commissioned by Thailand’s then-ruling military junta in 2014 that inexplicably featured a young boy drawing a portrait of Hitler in front of a swastika.

In one incident, a local up-and-coming streetwear designer named Hut, known for his T-shirts featuring a cute and cuddly Hitler motif, in 2011 incurred the wrath of the then-Israeli ambassador to Thailand, who lost his temper and marched down to his shop to confront him about his bestselling “McHitler” T-shirts.

The ambassador was met at the stall with a Hitler dummy saluting on repeat with an electric arm.

“He ruffled some of my shirts and crumpled one of my business cards,” Hut recalled in a 2012 interview with The Jerusalem Post. “[Now] when foreigners complain [about my representations of Hitler], I tell them it’s Charlie Chaplin.”

On several occasions, Thai officials have stepped forward with public apologies and pledges to do better in terms of education and raising public awareness about the Holocaust. Even the country’s prestigious Chulalongkorn University apologized profusely in 2013 for allowing a “congratulatory” mural depicting Hitler to be displayed on its campus.

But despite the anger these acts have provoked, and the years that have passed, the prevalence of Nazi imagery in the country “remains the same”, according to Tul Israngura Na Ayudhya. The specialist in German history at Chulalongkorn told VICE World News that holocaust education in Thai schools remains abysmal despite high-profile promises made by the Ministry of Education to the Israeli embassy in Bangkok to improve awareness.

“There might be less cases of controversial Nazi episodes being reported by the media, but Nazi imagery is still around,” Tul said, adding that the issue was still “prevalent” and “problematic.”

“More Thais now know who Hitler is, but they view him like they view others like Che Guevera, Mao and Kim Jong-un, and do not see the full extent of the atrocities, or what victims of the Holocaust were put through,” he said.

“In the Thai imagination, the Holocaust is just a tiny appendix—no longer than a few sentences in history textbooks, and Hitler along with his entourage, are still not that bad.”

VICE World News reached out to the Israeli embassy in Bangkok for comment about Nazi memorabilia still being sold by Thai merchants in 2021. Officials were yet to provide a statement as of publishing.

“In the Thai imagination, the Holocaust is just a tiny appendix—no longer than a few sentences in history textbooks, and Hitler along with his entourage, are still not that bad.”

Like other Thais his age, student Narupol Chaiyot admits to owning quirky T-shirts adorned with cartoon versions of Hitler “before he knew any better.”

“Cartoons by local designers are generally very popular among Thai youth,” he told VICE World News. “Whether it’s Hitler, Mao or even U.S. presidents looking silly, we usually wouldn’t think twice about inferring any meaning behind the characters. We also like wearing silly slogans and brand logos, so it isn’t anything out of the ordinary to us.”

But Chaiyot says that recent upheaval in Thailand, which saw student-led protests challenge the military-backed government of Prayut Chan-o-cha and push boundaries in their criticism of the monarchy, has sparked a greater awareness among young Thais. He says that personally, he now has a greater awareness of why such items could cause hurt and offence.

“Many young Thais, having gone through multiple protests in Bangkok against the military coup over the course of last year, are against dictatorship, and that’s what Hitler really was,” he said. “I would obviously think twice about buying anything with [Hitler’s] face or symbols on it, because I don’t believe in the kind of ideology that he sought to create.”

Back at Chatuchak, a few alleys away from Ton’s Nazi side hustle, is another small shop, “Siam Rare Books and Antiques”. Once run by Bavarian-born man Manuel Finsterer, known for selling rare Nazi memorabilia and historical objects that have angered tourists, today the shop is closed and shuttered, with Finsterer back in Germany.

“It was the pandemic that drove him back to Germany, not anger over his store,” said a Thai bookstore owner next door. “But he said that he was worried about heading home after doing business in Thailand and he left quite quickly.”

Did he have time to pack up and sell off all his controversial collection of Nazi history books and artefacts? Apparently not.

“I unloaded them off him, and put everything online at very good prices,” the man said. “It all sold out quickly.”