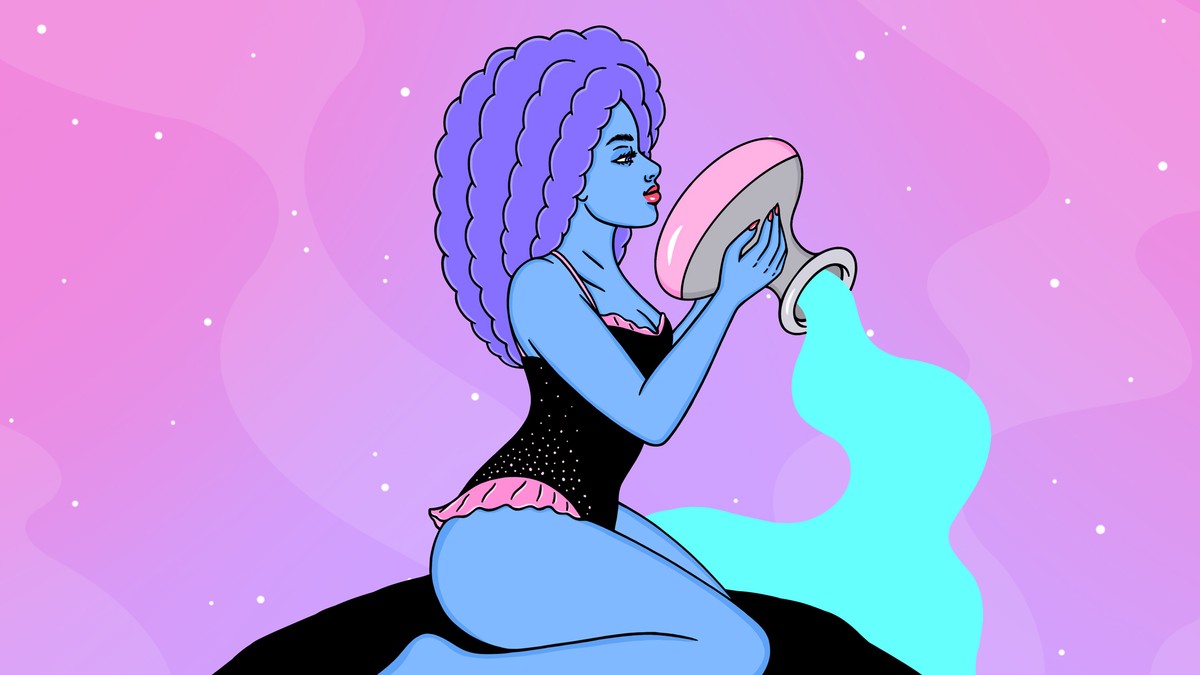 On Tuesday, February 8, energetic Mars harmonizes with Uranus, the planet of surprises, at 9:57 AM, providing quick and intelligent resolutions to any destabilization. This can embody the phrase “work smarter, not harder,” since Uranus is a planet that represents innovation. It’s easy to implement plans that have never been done before. People will put their trust in someone who is experienced and proficient, even if their plan is offbeat.

Mercury retrograde has ended, but as it resumes forward motion, it retraces its old path; this is known as Mercury retrograde’s “post-shadow period,” where we get a third and final swing at conversations, purchases, or ideas. Mercury meets power planet Pluto for the third time on Friday, February 11, at 9:04 AM: Secrets, betrayals, or manipulations are recognized, in the news as well as in our psyches. This might be a moment of psychological breakthrough and understanding the unconscious survival impulses that shape our brains and the way we see the world. Mercury met with Pluto on December 30, 2021 and January 28, 2022, so look back to those dates for clues!

You are covering a lot of ground, Aries, and everyone can see! Your planetary ruler Mars is in a highly visible sector of your chart, putting your ambitions on public broadcast. You’re taking impressive steps for the world to see! Mars harmonizes with inventive Uranus, which could point toward a futuristic revenue stream from these public gestures. Connecting with your community online could be a source of income, or another non-monetary means of support and sustenance. Mercury, the planet of commerce and communication, meets power planet Pluto, which could help you tap into a deeper well of resources. This can also be a time to understand power dynamics with authority, your own authority included.

You might be feeling a little blue about your career or public life, since the sun is with somber Saturn, making you face the facts or see things a little more harshly. You’re dealing with these things with integrity and responsibility, Taurus. There are a lot of conversations happening, though, as you’re poking around and seeing what’s out there for you. This Mercury retrograde had you reconsidering what you believed in; it was really philosophical! Now that it’s over, it’s time to strengthen those beliefs and ideas. It is brave to carve your own path and make space for yourself in all of your special glory, as Mars harmonizes with quirky Uranus.

Aquarius season is a reality check when it comes to your morals, travels, and education. There might be a little sadness or dry humor when dealing with the limitations of these topics. Your planetary ruler Mercury ended its retrograde last week, which had you confronting your debts and revenue streams. Now that Mercury meets Pluto once again, you’re in contact with powerful financial resources. This can be a time when you get whatever you ask. You could also use this opportunity to pay off a debt or take on a loan. Don’t let insecurity or FOMO keep you up at night as action planet Mars harmonizes with Uranus; focus on being grateful what you have and avoid comparing yourself to others!

Aquarius season brings up topics of intimacy and trust in relationships. This could also be a time of recognizing your financial responsibilities, whether that means debts or loans. You’re seeing how money has its limits, or that other people have budgets, too. Don’t let this get you down, Cancer! There is more to life than money. Your relationships are still a focus. Messenger Mercury meets with power planet Pluto once more, bringing up things that were hidden. There might be some conversations that seem too big to approach, but they aren’t so scary once you get around to them. Mars harmonizes with Uranus, and you and a partner can advance quickly toward your wildest dreams!

Aquarius season brings life and energy into your relationships, dear Leo! Your partnerships are your main focus right now, romantic or otherwise. There is, however, a sense of gravity with serious Saturn in the mix. You might have to accept some harsh realities about your partners or partnerships, or this could bring a clearer understanding of your commitments to each other. Approach these topics with maturity. Your health and work responsibilities are still firing off. Mercury meets with power planet Pluto, showing you how deep your daily commitments really go. You’re willing to take on the task, no matter how unconventional, as action planet Mars harmonizes with Uranus, giving you the willpower to make do with life’s lemons.

You’re cleaning up the mess that Mercury retrograde left behind! Your planetary ruler Mercury meets with power plant Pluto once more, presenting the perfect opportunity to gain a deeper understanding of your desires and sex drive. Relationships are a fertile area to understand your own psychology and deeper patterns. You might not be looking at your own shadow, but the shadows of your friends, lovers, or children. Action planet Mars harmonizes with Uranus, the planet of surprises, and you have a lot of energy to reach new heights and distances. Desire can take you to incredible places! And there’s enough motivation or gas to get there…

Aquarius season is a really social and creative time for you, but even Libras have their limits in relationships. This is a great time to recognize your social boundaries and even turn down some invitations. Maybe you don’t actually enjoy spending time with every single person and need to make space for the people that you do like, and in the meantime focus on your own private affairs. Mercury, the planet of the mind, meets psychological Pluto once more, bringing dense breakthroughs about childhood and family dynamics. Action planet Mars harmonizes with Uranus, the planet of rebellion, which can bring some unconventional resolutions to financial issues related to your home.

Aquarius season is a cozy time of rest and hiding away from the world—but there could be a sadness or awareness of heavy topics that makes it harder to get out of bed as the sun meets serious Saturn. Recognize the power of your mind and your ability to be the source of your own motivation, dear Scorpio! Mercury, the planet of the mind, meets power planet Pluto, sending you deep, profound messages about your shadow and drive, giving you a more dimensional understanding of your motivations and habits. Action planet Mars harmonizes with Uranus, favoring unconventional relationship dynamics. Personal freedoms are favored, and there’s nothing stopping you from doing what you want!

Aquarius season can be an extremely mentally stimulating time: You’re finding the consistent backbone of your ideas! There might be some mental heaviness, too, since Saturn, the planet of gravity and consequences, is with the sun in Aquarius, adding a dose of reality and sarcasm to your usually chipper self. While you’re thinking of things conceptually, there is a lot happening in your material world, too. Mercury, the planet of commerce and communication, meets Pluto, the planet of hidden resources, in your chart’s house of personal resources, cluing you into how to trade things in order to access a reserve of wealth. You’re doing whatever it takes to secure sustenance, especially as Mars harmonizes with Uranus, the planet of the unconventional.

Aquarius season has you looking at everything you have and trying to make it last forever. There is a sense of sustainability in your financial life as you come up with long-term plans or goals. Your ideas are moving forward a little more swiftly this week as Mercury retrograde is over and the planet of communication moves through your sign. Mercury meets with power planet Pluto and your convictions are strong. You might be gripping certain ideas or concepts so tightly that it’s intimidating! If this is causing you discomfort, these thoughts can be triangulated with a trusted ear. Action planet Mars harmonizes with rebellious Uranus, and you’re going for relationships and pleasures with no regard for what is right or wrong—ruthless!

There’s a moment of heavy lifting going on: While it is Aquarius season, the sun meets Saturn, your serious planetary ruler, which can have you looking at harsh realities, consequences, and responsibilities. You’re dealing with things maturely, but it’s also important that you understand how to access inner peace and happiness despite your full awareness of life’s tough lessons. There is a lot happening behind-the-scenes and you can source energy from something hidden, possibly spiritual, as action planet Mars harmonizes with Uranus, giving you a boost to power through winter blues. Be mindful of your sleep schedule and caffeine intake, which could make for sleepless nights and some sort of analysis paralysis.

Even though Aquarius season pushes you toward rest and quality alone time, your social life and your goals are calling your name, too! You have to make time for both, little fish. It’s important to balance your passions with time to check in with yourself at the end of the day, in silence and solitude. Mercury meets power planet Pluto, giving you an in-depth understanding of your libidinal drive toward your goals. It’s a great time to understand “why you’re like this.” This could also be a moment of understanding your friends’ habits, impulses, or even secrets.just be gentle with gossip and subtweeting. Mars harmonizes with Uranus and there is nothing stopping you from moving forward with your ambitions and genius ideas!