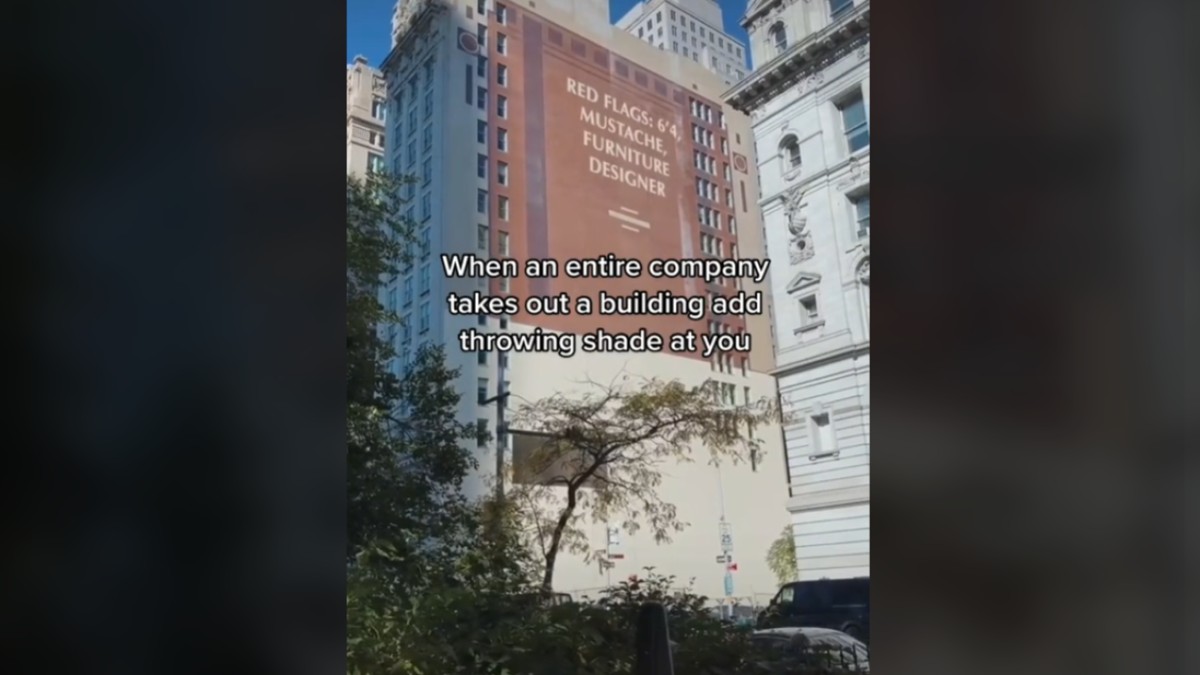 When a bunch of women in New York found out they had all gone on dates with the same guy, at first it was a hilarious taste of drama and gossip. As the story spread, it turned into something different, and more harmful.

If you’re here, you probably already know about West Elm Caleb. The story is pretty simple on the face of it. One woman made a video about going on a date with a tall man with a mustache who worked at West Elm. Another woman saw that video, and realized she was going on dates with the exact same guy. As those videos circulated, many other New York women said that they too had either matched with him on a dating app, or gone on a date or two with him, and a pattern began to emerge.

The behaviors that this man exhibited as a romantic interest are not particularly flattering. Women said that he would send over-the-top romantic messages before even meeting them, making some of these people feel manipulated by him after he later would stop messaging them entirely. At least one woman said she received an unsolicited dick pic from him. The funniest detail is that he sent every woman the same exact Spotify playlist.

Caleb is a person who did specific things to specific people, people who had a right to take issue with his behavior. But what happens on the internet is that specificity gets flattened out of the conversation extremely quickly. Shortly after the videos about these women’s bad dates were posted, other people, in different parts of the country who had never met Caleb and didn’t know anything about him, offered their commentary on the subject. Just as it had happened for Couch Guy or this trans woman doing a house renovation, the onlookers fired up their abilities as internet sleuths, and before long Caleb’s full name and LinkedIn had been posted. Random people who had nothing to do with the story whatsoever began posting about Caleb sightings or asking if they should go confront (harass) him.

As one of the original West Elm Caleb TikTokers would later say, as people started following along from the sidelines, this man stopped being a specific man who had done specific things, and became “a metaphor in the cultural zeitgeist.”

These are people who were spurred by a desire to hold someone accountable, but without stopping to think why he needed to be held accountable to them, a group of people who he will never meet. Instead of just being one shitty guy, he became content, a stand in for every single shitty guy that’s ever been on a dating app. It’s also not really clear what Caleb would even be held accountable for. The acts described by the women who had dated him described a person who wasn’t particularly nice and was even a shitty dater, but who was seemingly not committing crimes or abusively wielding his power in some way. It’s useful to talk about the harsh realities of dating in your 20s, when people can be very cruel, but as far as we know, Caleb became an internet villain simply for being what these people considered to be a bad date.

She further clarified that she only made a video about him to confirm to her own audience that the mystery guy she had mentioned in previous videos was in fact, the man who had been going viral on the platform independently of her.

“Like, I purposefully never shared a photo, I never said where this man who I was going on a date with, where he worked, or his name, or any of this private information, because I thought it would be gross to put on the internet,” she said. “I find it so gross that brands are capitalizing on this… or just the fact that so many people on my TikTok care about it. Why are so many people invested in this across the country and want to see the downfall of this man?”

Sharing stories about this man did seem to be a satisfying moment of catharsis for a lot of people on TikTok, especially the women that he had actually dated. And if the content is good and exhibiting viral potential, it becomes harder and harder not to engage with it. You have to do another TikTok, you have a funny tweet, and now here comes the VICE blog. It’s self-propelling content, and it feels good to participate in it because so many women have met men who act similarly. It’s like an inverted version of Alex from Target, only Alex is cute and goes on Ellen and Caleb sucks and has to delete his social media because so many people he never met hate him now.

But it is worth asking—do we need to blow up this one specific instance into one of national importance? Is it at all appropriate for Hellman’s Mayonnaise to tweet about the private life of a guy who works for a company that makes overpriced couches?

Or for this incident to be used as advertising in the city that he lives in?

Not every moment of harm is something that needs to go viral or that you need to have an opinion about or need to publicly weigh in on. West Elm Caleb does not need to be a household name or elevated to national importance. Gossip can keep women safe from both abuse and more mundane forms of pain, but it can also cause harm in itself. West Elm Caleb may indeed be a fuckboy, but his fuckery was not so spectacular or noteworthy as to deserve widespread ridicule and doxing. On the internet, a person can become a symbol without them even knowing it, which makes it all the more important to remember that there’s a real human being on the other side of that #content.