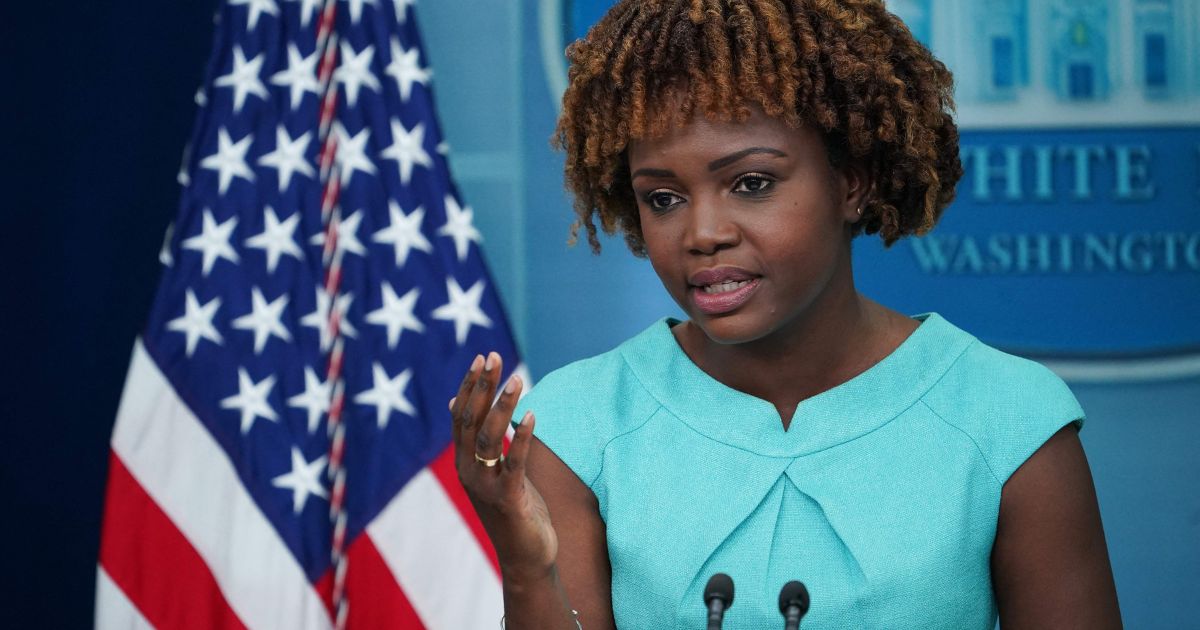 Work at the White House long enough, and President Joe Biden just begins to rub off on you.

Take White House press secretary Karine Jean-Pierre, for instance. Sure, she may be the dissembling mouthpiece for a bumbling president, but she seemed competent enough — at least by the standards of the Biden administration.

How quickly things go upside-down, particularly if you’re the press secretary. Soon, you’re appropriating Bidenisms of your own, referring to the Nord Stream 1 pipeline by the name of a department store.

It’s not a particularly humorous situation, mind you: Gas to Europe via the pipeline has been cut off until sanctions on Russia are lifted, Kremlin spokesman Dmitry Peskov told Russian news agency Interfax.

Moscow had initially said the pipeline had been shut down due to maintenance concerns, but Peskov didn’t get the message.

Biden Posts Text Thanking Him for Student Debt Forgiveness, Gets Roasted When Readers Point Out the Obvious

“[Gas] pumping problems arose because of the sanctions imposed against our country and against a number of companies by Western states, including Germany and the U.K.,” he said. “There are no other reasons that could have caused this pumping problem.”

Jean-Pierre said during her Tuesday media briefing that Russia was “weaponizing energy” via the move. However, what caught most people’s attention was how she pronounced Nord Stream 1.

Have you ever heard of the ‘Nordstrom’ pipeline?

It’s not quite as good as her boss’ “rededudenedefet” gaffe from Labor Day, but it’s close:

PROMPTER: “Do you know how much we Reduced the deficit this year?”

That said, Jean-Pierre’s malapropism drew plenty of derision on Twitter.

‘I Knew This Was Coming’: Doocy Corners WH Press Sec Over Her Tweets on 2016 Election

“Looks like we’ll have to rely on Nordstrom Rack,” said Twitterer @TheBourbonette, referring to the lower-priced corporate cousin to Nordstrom.

Looks like we’ll have to rely on Nordstrom Rack. https://t.co/A9vUe1PUMB

“This was not a slip of the tongue,” GOP Sen. Ted Cruz of Texas tweeted. “Biden gave it to Putin as a gift from Nordstrom’s.”

This was not a slip of the tongue.

Biden gave it to Putin as a gift from Nordstrom’s.#BidenPutinPipeline https://t.co/Asw2RyvBEe

Biden would never sacrifice his largely upper-class female base by letting Russia shut down the Nordstrom pipeline. https://t.co/7R5vkAU8hY

“What is this world coming to? Will the Chinese follow suit by shutting down Saks Fifth Avenue?” tweeted another user.

What is this world coming to? Will the Chinese follow suit by shutting down Saks Fifth Avenue? 😞 https://t.co/AE2s3Edd47

The puns may belie a serious situation — but then, this is the problem with near-constant gaffery. At least Jen Psaki left while her mind was still (relatively) intact.

Soon, Jean-Pierre will be talking about how her boss was “rededudenedefet” and how anyone who didn’t think so was a “lying dog-faced pony solider.” Everyone around Biden eventually turns into him, cognitively. It’s all just a matter of time.