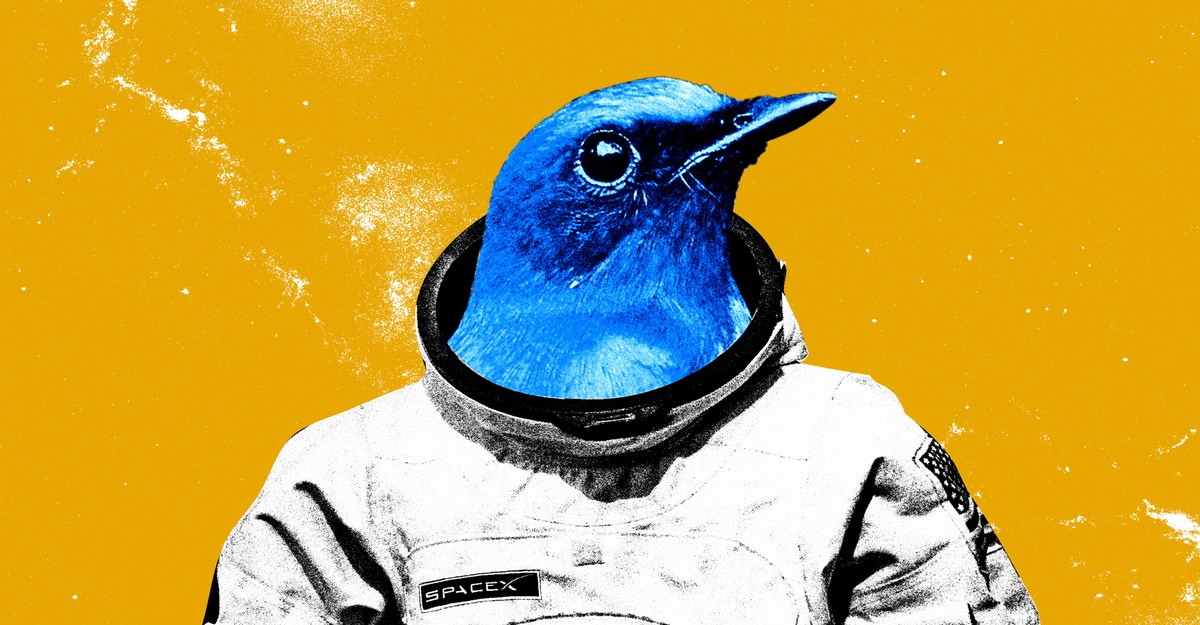 Last night, after Twitter accepted his $44 billion bid to buy the company, Elon Musk traveled to South Texas, where SpaceX is building prototypes for a rocket system designed to take people to Mars someday. Earlier, he had shared some of his to-do list for the social-media company he could soon own outright: “enhancing the product with new features,” “defeating the spam bots,” and making the platform’s algorithms public and available for anyone to see. But that evening, his to-do list was more concrete. According to the author Walter Isaacson, who is writing a Musk biography, the billionaire “held his regular 10 pm meeting on Raptor engine design, where he spent more than an hour working on valve leak solutions. No one mentioned Twitter,” Isaacson tweeted. “He can multitask.”

Certainly no one doubts that Musk—already the head of SpaceX, Tesla, the Boring Company, and Neuralink—can multitask. The murkiest question about his newest acquisition is not whether he can switch between space travel and social media but what he’s thinking about free speech when he’s not contemplating valves. Right now, before he takes charge of his new business, the most anyone can do is make educated guesses about how Musk’s stance as a self-described “free speech absolutist” might manifest, and read his tweets like sopping tea leaves at the bottom of a mug.

But one way to think about how Twitter might fare under Musk is to look at how the billionaire operates those other enterprises that occupy his mind. More than any Muskian pronouncement, that history can hint at what his ownership might mean—for Twitter as a company with thousands of employees, a platform with millions of users, and an unruly public forum on an unruly internet. I’ve described Elon’s world before as the Musk Cinematic Universe, and in his businesses, as in Marvel movies, certain themes appear again and again, impatience first among them. Here are four axioms for what to expect next.

Musk is a well-known workaholic. During particularly intense production sprints at Tesla, Musk was at the company’s offices day in and day out, sleeping under his desk, on a couch, and even on the factory floor itself. The goal in those moments was to produce several thousand Model 3s a week, a decidedly more concrete effort than managing algorithms. But if Musk decides to really dive into Twitter, its employees can expect this level of involvement. He certainly has the time. Although Musk is working closely on SpaceX’s vision for its Mars rocket, known as Starship, the rest of the enterprise runs quite smoothly without him, under the watchful eye of COO Gwynne Shotwell, launching both people and payloads into space without requiring its chief designer’s presence in mission control. Musk has spent years becoming an expert in electric-car manufacturing and rocket engineering; his next learning binge could be about content moderation.

Some Twitter employees reacted with “shock and dismay” at Musk’s takeover, according to The Washington Post, worrying that Musk “would attempt to break down safeguards to protect everyday users that staff had built over many years.” And he has given at least one sign that he would not step in between vulnerable users and aggressive, dangerous behavior. Last month, Musk said that following Russia’s invasion of Ukraine, “some governments (not Ukraine)” had asked SpaceX to configure its Starlink internet satellites to block Russian news sources; Musk said “we will not do so unless at gunpoint.” Among several possible scenarios for a Musk-owned Twitter, the most likely outcome, as Charlie Warzel writes in his newsletter at The Atlantic, is that Twitter will return to an earlier state, circa 2016, when the platform “prioritized free-speech maximalism and underinvested in tools for users to protect themselves,” producing an environment with minimal moderation and more rampant harassment and hate. So the users who stand to have a worse time on Twitter under Musk are the same people who have bad experiences there already—women, people of color, members of the LGBTQ community, and other minority groups—who have benefited most from the specific tools that Twitter has put in place in an attempt to deflect abuse.

Some Twitter workers have also expressed concern that Musk “could inflict damage to the company’s culture and make it harder for people to do their jobs,” the Post reported. The analogs in the MCU are bleak. Musk is a visionary, but he’s a terrible boss. He has reportedly berated employees and even fired them on the spot. Black employees at Tesla have described brutal instances of racial harassment at Tesla; in February, California filed a lawsuit against Tesla on behalf of more than 4,000 current and former Black workers. Last year, several female former SpaceX employees described the sexual harassment they had witnessed or experienced at the company, saying that management failed to protect accusers and penalize perpetrators. On top of all this, Musk has retaliated against employees who publicly speak out against his companies. (Musk and his companies have denied any wrongdoing in the past.) Accordingly, Twitter employees should expect him to have little patience with criticism or complaints, however justified.

Musk has a reputation for setting unrealistic deadlines. In the fall of 2019, for example, Musk said that his Starship rocket would reach orbit in less than six months; SpaceX has not even made its first attempt yet, and likely won’t until later this year, when—as is often the case with experimental rockets—the first one will probably explode. The space community refers to Musk’s ambitious approach to time lines as Elon Standard Time. Building spaceships takes much longer than reprogramming one function of a website, but don’t expect your user experience to change within days of a tweeted decree.

On some occasions, Musk will declare that his companies are going to do something—apparently without warning the managers at those companies, sending employees scrambling to reach a deadline they’ve already missed. In 2020, when Musk tweeted that Juneteenth is “henceforth considered” a holiday at Tesla and SpaceX, some Tesla employees were already at work. And when Musk’s clarification that employees would need to use their vacation days to mark Juneteenth, a celebration of the emancipation of enslaved people in America, prompted significant backlash, SpaceX sent an email to staff reversing course, saying that the day would indeed be an official, paid company holiday, starting the following year. So, take Musk’s promises with a grain of salt until you see the results.

4. Musk could go full “maker of civilization” on Twitter.

Last night, Jack Dorsey, the founder and former CEO of Twitter, tweeted that he believes Musk will put Twitter on the right path, saying “I trust his mission to extend the light of consciousness.” Where have we heard that before? From Musk, of course, who uses the line often when he talks about sending people to Mars and making our species “multiplanetary.” These goals, he says, are necessary to preserve earthly life. Already, he’s doing the same with Twitter, elevating what happens on the platform to a concern of civilizational importance and even a civilizational good. “Twitter is the digital town square where matters vital to the future of humanity are debated,” Musk said in a press release yesterday.

But note that Musk is following his own vision for humanity, not anyone else’s. So he is likely to shape Twitter into the kind of user experience that he himself wants. And that vision will be backed up by his trademark relentlessness, the talking about valves for an hour at 10 p.m. on a Monday night energy. Even Jeff Bezos, who wants his own space venture, Blue Origin, to help return American astronauts to the moon, believes that it’ll be up to future generations to carry out his most sci-fi ambitions, such as building space habitats around Earth with artificial gravity. Musk wants to go to Mars now, and he wants the world around him to bear the signs of that effort. That’s why he renamed a street near SpaceX’s launch site in South Texas “Rocket Road,” even when the people who lived nearby weren’t all that pleased about his presence. Expect Twitter to become wrapped up in Musk’s utopian—or, depending on your viewpoint, dystopian—narrative, and maybe watch out for a Free Speech Lane near the company’s headquarters.

Musk’s well-known feeling about reusable rockets, electric cars, underground tunnels, and high-speed trains, though, cannot predict exactly what the real implications of his reign at Twitter will be—particularly for people who aren’t outright Musk fans, whether they’re unhappy Twitter employees or journalists tasked with scrutinizing his efforts. I’ve been thinking about that last one quite a bit. Yesterday, as news of the Twitter buyout appeared imminent, four people returned home from the International Space Station inside a SpaceX capsule, splashing off the coast of Florida. The next crew is scheduled to launch tomorrow. These missions seem routine now, but spaceflight is a dangerous and sometimes deadly business. What happens if a SpaceX mission fails and kills the astronauts on board, and suddenly Twitter is flooded with people trying to get to the bottom of the situation?

Musk would have at his disposal a means to control the narrative that NASA, for example, did not have in the aftermath of the shuttle disasters—and the agency certainly tried to control that narrative. Maybe he won’t remove critical or curious users in a formal sense, but could he slide into their DMs and offer to buy their silence, as he did with the college student who runs an account about the whereabouts of Musk’s private jet? (The student told me that Musk blocked him after he declined the offer.) “I hope that even my worst critics remain on Twitter, because that is what free speech means,” Musk tweeted yesterday. Eventually, those words could be dramatically tested in a variety of scenarios. NASA has hired SpaceX to develop a version of Starship that will someday land American astronauts on the moon for the first time in 50 years (sorry, Bezos). And the crew will tweet from the lunar surface, just as they do from the space station. “One small step” would have gone over well with Musk, I’m sure. But would the astronauts take an extra beat before posting, to really think about what they should say, not only because they know they’re using Elon Musk’s social network, but because they’re relying on him to bring them home?