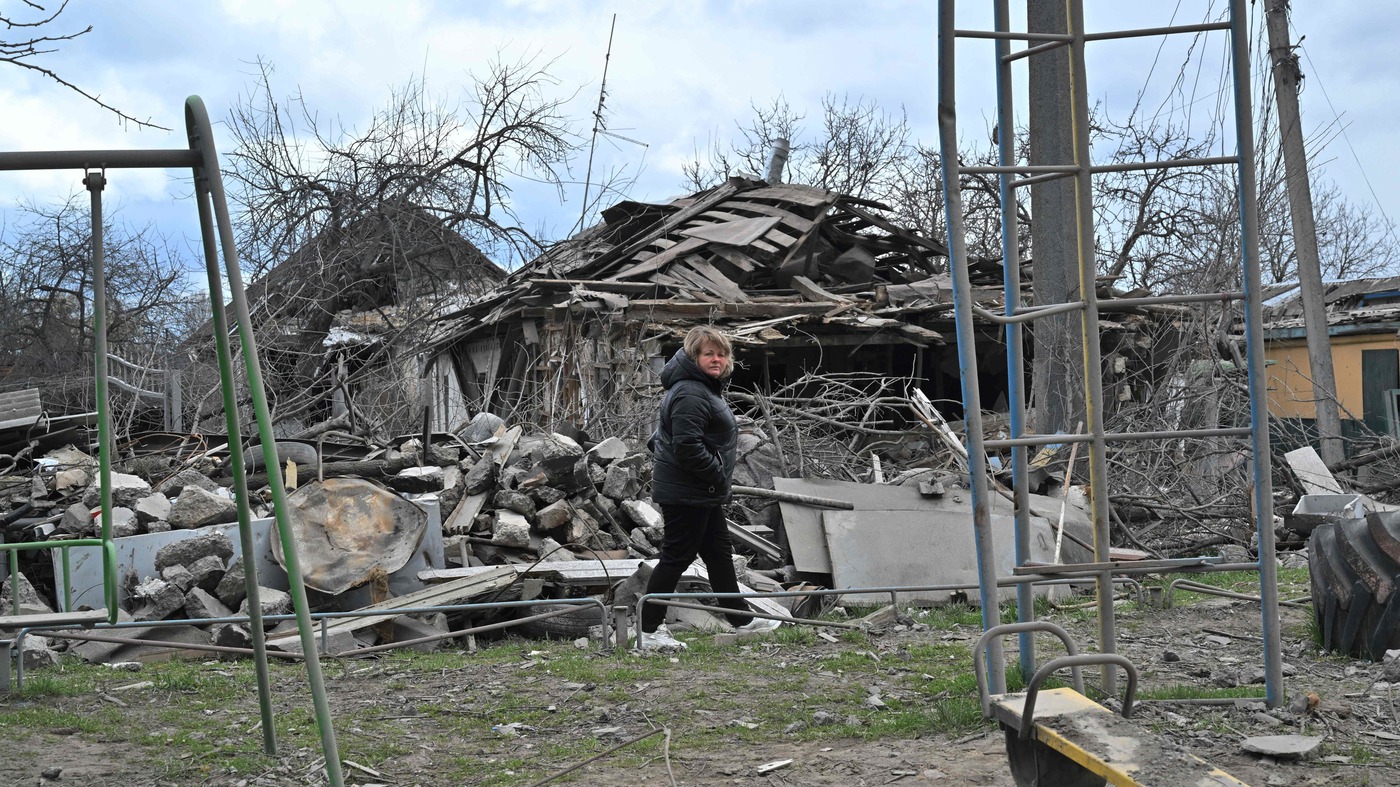 A woman walks past a destroyed house following bombardment in the Ukrainian town of Borodianka, in the Kyiv region, on Sunday.

A woman walks past a destroyed house following bombardment in the Ukrainian town of Borodianka, in the Kyiv region, on Sunday.

As Sunday draws to a close in Kyiv and in Moscow, here are the key developments of the day:

Russia is renewing its attacks on the Kyiv region after retreating from the capital. The Russian Defence Ministry said on Sunday that it destroyed an ammunition factory near the city of Brovary, in the Kyiv region, overnight. The new wave of attacks served as a reminder of the threat still facing Kyiv. Ukrainian MP Lesia Vasylenko tweeted on Saturday that it was the second day in a row of explosions in the capital.

A group of Ukrainian fighters holed up in the Azovstal steel plant in Mariupol are told by Russian forces to surrender “in order to save their lives.” The Russian military has been unleashing a relentless assault against the port city in southeastern Ukraine, which is key to Moscow’s invasion of the country. Ukrainian President Volodymyr Zelenskyy described the current situation in Mariupol as “inhuman.”

Humanitarian corridors were closed Sunday due to failed talks between the two countries. That left as many as 100,000 civilians trapped in Mariupol with no way out.

At least 202 children have been killed in Ukraine as a result of the Russian invasion, according to preliminary data from the country’s Office of the Prosecutor General. Additionally, more than 361 children have been injured, officials said. UNICEF, the United Nations agency for children, estimates that nearly two-thirds of Ukrainian children have been displaced in the conflict.

On Easter Sunday, Pope Francis called for an end to war in Ukraine. “May there be peace for war-torn Ukraine, so sorely tried by the violence and destruction of this cruel and senseless war into which it was dragged,” he told a crowd of worshipers in St. Peter’s Square.

A new generation of young Ukrainian politicians say the war is accelerating their efforts to push for the country to be more aligned with Europe.

Hundreds of Ukrainian refugees at the U.S.-Mexico border are seeking asylum.

Despite the country’s NATO membership, Polish citizens are joining the military and learning to shoot guns in case they need to defend against a Russian invasion.

For several days, eastern Ukraine has been bracing for more fighting as Russia prepares what’s expected to be a major offensive in the region.

You can read more news from Sunday here, and daily recaps here. For context and more in-depth stories, you can find NPR’s full coverage here. Also, listen and subscribe to NPR’s State of Ukraine podcast for updates throughout the day.