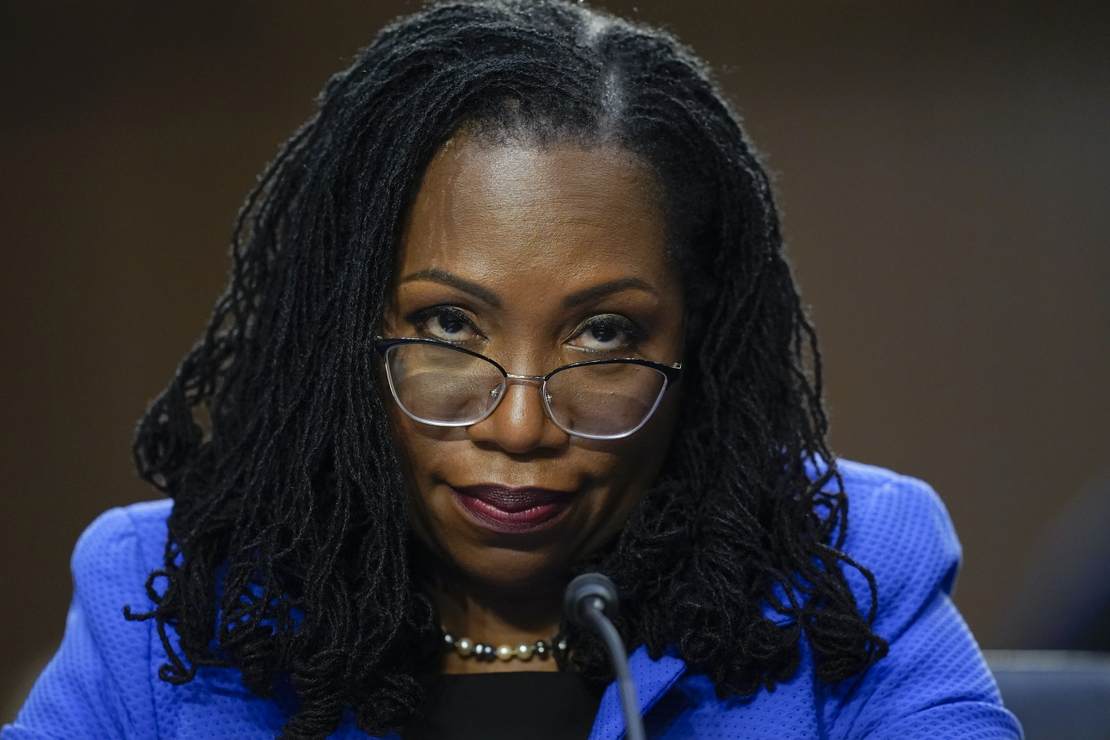 There sure is a lot of paranoia about Ketanji Brown Jackson today. Isn’t our national whodunnit about the leak of the Alito draft enough to satisfy the conspiratorial-minded?

As much as I want to dunk on Blackburn for floating this, the probability that we’ll see this very idea proposed on social media by some earnest liberal hot-taker in the next few weeks approaches 1.

They’ve been spoiling for years to pack the Court, right? Well, now they have a fourth liberal justice warming up in the bullpen, ready to take the field. What if they bring her out to the mound and she and Stephen Breyer pitch at the same time?

“There is a framework in place that should keep that from happening. But what we have to be aware of is that the Democrats are taking unprecedented actions. And when you look at what has transpired, when you have Chuck Schumer out there attempting to intimidate or threaten or silence the court and undermine its legitimacy, that is something that is of concern,” she added.

“This week he (Schumer) has been active in trying to undermine the legitimacy of the court and his comment about ‘everything being on the table.’ I just think it is smart for us to be mindful and watchful,” Blackburn said.

I don’t know where to start. How about the fact that Jackson’s formal nomination to the Court reads, “Ketanji Brown Jackson, of the District of Columbia, to be an Associate Justice of the Supreme Court of the United States, vice Stephen G. Breyer, retiring.” That is, she was nominated and confirmed explicitly to replace Breyer. If Democrats want her to join Breyer on the Court instead, I assume they’d have to hold a new confirmation vote.

But first they’d have to pass a law expanding the Court to 10 members. Where are they going to get the 10 Republican votes they need to beat a filibuster on that?

And if they can’t find those 10, how do they plan to convince Joe Manchin and Kyrsten Sinema to nuke the filibuster to make it possible for them to expand the Court via simple majority, something those two have adamantly refused to do for the last 16 months?

Remember, Manchin is pro-life and anti-Court-packing. Good luck getting him to bend this time.

Even if they convinced Manchin and Sinema to go nuclear, there’s the small matter of Jackson having to recuse herself from the Dobbs case since she didn’t participate in oral arguments or read any briefs. The Court itself would have to agree to rehear the case after she’s seated in order to enable her to vote. Why would a conservative majority do that?

Having said all that, if the partisan roles here were reversed, I feel like Cocaine Mitch McConnell would somehow contrive a way to get this done. It would be his own-the-libs magnum opus on court appointments.

In Blackburn’s defense, the Democratic dream of packing the Court remains alive and well, albeit thwarted by Manchinema:

A stolen, illegitimate, and far-right Supreme Court majority appears set to destroy the right to abortion, an essential right which protects the health, safety, and freedom of millions of Americans. There is no other recourse. We must expand the court.

If you believe some polling, the public is warming up to it too:

Big change: Americans want term limits for Supreme Court justices by 66% to 21%, and favor expanding the Court by 55% to 36%. (Morning Consult poll for @politico) When I tested public appetite for Court reforms in 2007 (part of “A More Perfect Constitution”) resistance was great.

That may be one unexpected political consequence of a 6-3 conservative Court flushing Roe. I’m skeptical that it’ll do much to improve Democrats’ midterm chances but the public’s general pro-Roe disposition will probably lead to more Dems being radicalized about Court-packing in the aftermath. Thankfully, given how the next two election cycles are shaping up, they won’t be in a position to act on those impulses for years to come.

But they will eventually.

For now, Senate Dems are focused on some sort of symbolic legislation to signal their commitment to Roe. The obvious move is to vote on whatever Susan Collins and Lisa Murkowski are comfortable with so that Democrats can rightly say afterward that there’s bipartisan support in the Senate for preserving a right to abortion. That won’t stop SCOTUS from doing what it wants to do but it’ll give the Dems a talking point about how “radical” the decision is when it comes down. Instead, per Politico, they may end up with a Democrats-only bill. Why? Because they’re bad at politics.

The latest version of Blumenthal’s bill strips out non-binding language that some Democrats found controversial — including statements linking abortion to “white supremacy” and “gender oppression” and emphasizing that the protections in it apply both to women and “transgender men, non-binary individuals, those who identify with a different gender, and others.”

The mechanics of the bill, however, remain the same: It still states that medical workers have a right to provide abortions and patients have a right to receive them. The measure would also block states from adopting some of the kinds of bans and restrictions on the procedure currently allowed under Roe — like mandatory waiting periods — that are deemed “medically unnecessary,” and override states that have already imposed such laws…

Collins suggested Wednesday that the changes to the non-binding language won’t be enough to get her backing for the Democratic bill. She and Murkowski previously raised concerns that the Democratic-authored legislation is too broad in overriding state laws and about its effect on religious liberty.

Collins and Murkowski want a simpler bill that would codify Roe at the federal level in the early stages of pregnancy — which is exactly where most Americans are on the issue. Dems are promising that they’ll look at that legislation and could conceivably vote on it after they vote on their own bill, but my guess is that there are too many fanatics in the caucus to back a bill that suggests even obliquely that there should be room for regulating abortion after the first trimester. Oh well.