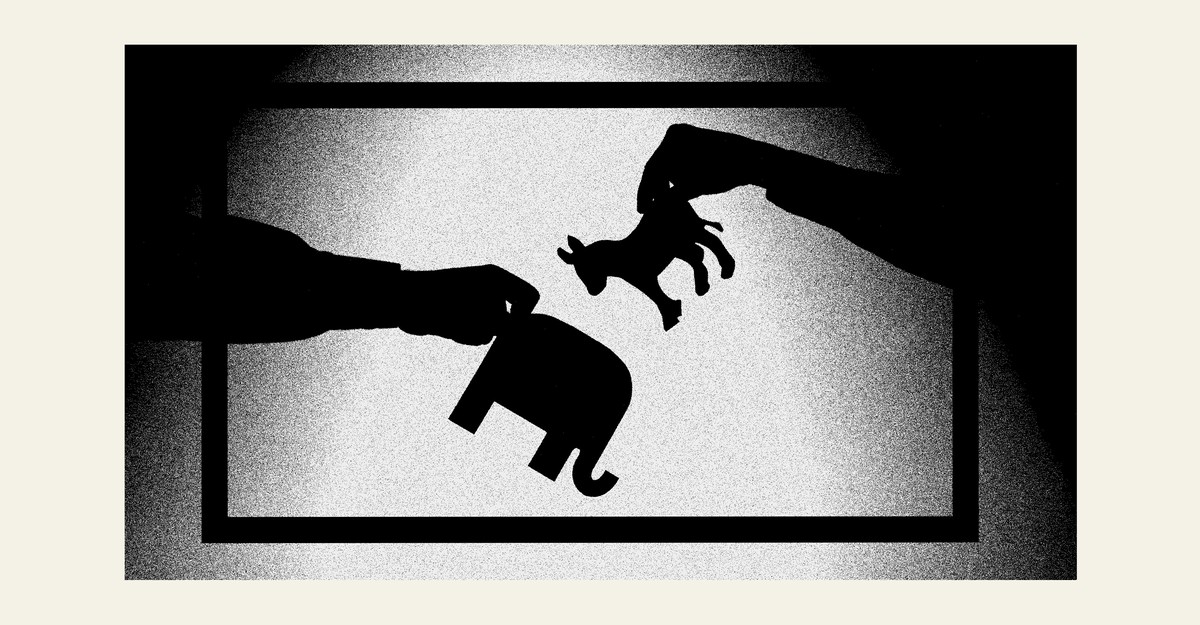 This is an edition of Up for Debate, a newsletter by Conor Friedersdorf. On Wednesdays, he rounds up timely conversations and solicits reader responses to one thought-provoking question. Every Friday, he publishes some thoughtful replies.

Last week, I asked, “What is a valuable insight, lesson, or perspective you have learned from someone who doesn’t share your politics?”

Jo revealed that she has been speaking with a young man who holds views that she normally finds “abhorrent”:

He often goes on rants about the need to protect gun rights, he questions the underlying principles of modern notions of “identity,” he rails against anyone or any group he perceives as harboring socialist tendencies—the MAGA-adjacent list of his usual topics goes on.

But “he holds these views because of his and his family’s experiences as Chinese citizens,” she explained, “so I find I can hear him out and even see where he is coming from.” She continued:

Though we continue to disagree strongly––for him, unchecked capitalism is the solution and government the problem, and I tend to invert that—we are able to continue talking to and respecting each other. Overall, this ongoing debate, helpfully defamiliarized because somewhat dislocated, has made me realize that it is not so impossible as I’d thought to understand at least some views of so many of my fellow Americans.

Adrian runs a bipartisan political business, and that has opened his eyes to the good sides of gun culture:

It has been an education. I’m still still not a big gun guy, and think our Second Amendment as currently interpreted isn’t great. But I get gun culture a lot more. Fill a freezer with meat! A gun is a mid-level barter item! Rabbit hunting is actually kind of fun! Who knew?

Whitney changed her opinion about who is best able to help people like her son:

As the parent of a son with Autism and a loyal Democrat, I’ve often believed that my party cares more about the disabled than Republicans. I’ve also presumed that the best way to ensure that people like my son are meaningfully employed is for the government to enact federal hiring mandates, create tax incentives and/or partner with “socially-minded” companies. On vacation I became embroiled in a heated discussion with a Republican, a staunch defender of the free market and opponent of government intrusion into private business practices. As I argued about how government is both more compassionate and better equipped to help my son, he replied, exasperated, “Whitney, who do you think is hiring people like your son already?! Who do you think can afford to be philanthropic and is business-minded enough to appreciate the qualifications from persons on the spectrum? Private companies! That’s who is going to hire your son!”

I froze in my tracks and considered his point––that maybe private corporations were better poised economically to create job opportunities, and maybe also had the social consciousness to do so. At the time I was aware of one private employer, SAP, that had taken advantage of employing this specific demographic. I decided to do a quick search for other similarly-minded companies and discovered that the TOP 10 organizations which employed and had “Autism-specific” hiring and training initiatives were all private companies.

My presumption that compassion resided in greater quantities in one political party, or in one sector of the economy, was not only uninformed but reflected the precise type of confirmation bias (selectively incorporating information about government initiatives which supported my theory, and neglecting information which contradicted my assumptions) that perpetuates corrosive divides. I stand corrected, and I no longer snap to judgments about which party, person or company is on the side of the most vulnerable members of our society.

Matthew is more empathetic after conversing across political lines:

The biggest thing I’ve learned is that everyone is different and faces different challenges. Most people just want a better life and don’t want to create problems for themselves or others. Unfortunately, life isn’t so simple. Depending on their challenges or livelihood they may be hurt by a new policy which benefits other people more than them. And don’t want to suffer to benefit others. It’s important to have faith that most people want reasonable laws … They deserve their opinion and say in legislative decisions. The disagreements we have, as tough as they can be, make democracy work.

I grew up in a super-blue city and state, in a super lefty family. I was raised on the values of trans/gay rights activism, progressive politics, and ideas about race relations that some today call “critical race theory.” I loved growing up in a super accepting, socially conscious community. But I do admit that this was a culture with a lot of derision for the American right, and one that outright rejected any criticism of our values as backwards and illegitimate. Then in my early 20s I moved to a super-red state, mostly working in rural, politically & religiously conservative communities. Now *plot twist* the people I once rolled my eyes at became people I related to and felt for deeply. They were my co-workers, my close friends, and then after I married, my family.

The real shift in perspective was having others point out the ways in which so-called “progressive” people can be just as reactionary, close-minded, and hypocritical as their political opposites! I started realizing the values of acceptance and social justice so often preached are seemingly abandoned by some once you find out who someone voted for, or that they hold the “wrong” opinion. I started to see how some political positions progressives hold can truly come off as elitist, irrational, and overly-controlling to the point of ridiculousness. To be sure, this didn’t make me completely give up my politics. But for probably the first time, I saw the flaws in my own views and actually understood why someone wouldn’t agree with me. If I’ve learned anything from my relationships across political differences, it’s that all of us are equally capable of being annoying and embarrassing with our politics!

Harold has shifted to the left in part because he believes that the right is using the power of the government to limit political discourse in red states––and that “canceling” others in the realm of culture, as the left is attacked for doing, is less dangerous than limiting discourse with laws:

I have always been a moderate. However, in the past I tended to lean further right. Since 2015, I have dramatically shifted left. Obviously the former president played a major part in that shift, but many thoughtful conversations solidified such a shift in my political views.

The left is often accused of “canceling” those with differing views. The culture, for good or bad, is shaped by the collective society in which ideas are subject to scrutiny, and favorable customs and views are subsequently adopted. While my views may not fully align with the prevailing customs, I understand that I at least have the freedom to hold my views in private or among trusted friends. Perhaps if our views become appealing enough, they will naturally grow and become the prevailing culture, although that is very unlikely. The mere possibility though is enough to ensure that the best ideas have a chance to prevail.

The right has broadly blamed the left for “canceling” those who tend to ascribe to their culture. Their solution therefore is to muster the power of the state to enforce their culture, because isn’t that what the left is doing? Herein lies the danger, and we are in fact beginning to see such state enforcement at work in states like Texas in which single vigilantes are empowered to enforce the whim of the state. Books are being banned and thought curtailed. Ideas are no longer subject to the public arena. This should be cause for alarm for all of us who value freedom. There is always talk of strength on the right, but upon further evaluation it seems to be closer to insecurity and a lack of confidence in the appeal of their ideas. After realizing this, it was hard to maintain my previous political leanings since they were not even confident in their ideas.

Steve finishes us off with an overarching theory. “The big lesson to be learned from those with whom I disagree,” he writes, “is that the human is a frail emotional being, guided only occasionally by reason. We are only a spec or two along the evolutionary path. We fight like animals because we are. So, in our personal internal lives, find comfort where we can, before we go.”

Thanks for your contributions. I read every one that you send. See you later this week.