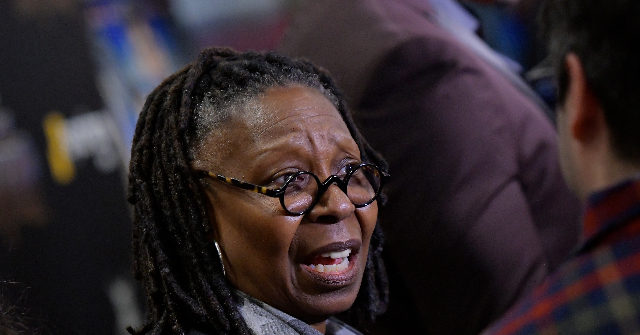 CLAIM: Whoopi Goldberg claimed Monday on ABC’s The View that Turning Point USA (TPUSA) “embrace[d]” neo-Nazis at its Student Action Summit in Tampa, Florida, over the weekend and that protesters wielding swastika and SS flags were “in the mix of people” at the event.

“You embrace [neo-Nazis] at your thing,” Goldberg claimed of TPUSA. “I know they were not in the building, but they were in the mix of people at the thing.”

VERDICT: FALSE. Turning Point USA did not embrace the group of individuals who stood outside the event venue wielding swastika and SS flags on Saturday afternoon. The protesters dressed as neo-Nazis were also never “in the mix” with event attendees. The protesters elicited the same reaction from event attendees as the pro-abortion protesters did one hour prior: they were shunned and faced backlash.

Moreover, that was not the only false claim Goldberg made Monday on The View. The television host also fictitiously stated that TPUSA had allowed the protesters dressed as neo-Nazis into the event.

“You let them in, and you knew what they were, so you are complicit,” Goldberg falsely claimed.

THREAD: Yesterday, @TheView & Whoopi Goldberg smeared and lied about TPUSA regarding an incident where supposed “nazis” showed up outside of the Student Action Summit. pic.twitter.com/9xonX9jC25

After being forced to retract her comment live on the air, Goldberg doubled down on her initial suggestion by falsely claiming that the conservative student organization welcomed the protesters at the event.

“Let me make a quick clarification about the neo-Nazis at the Turning Point event,” she said. “They were outside protesters. My point was more metaphorical. You embrace them at your thing. So, they were not in the building.”

While they were forced by their legal department to correct two of these misrepresentations live on air, Whoopi continued to insist that TPUSA somehow welcomed “nazis” into our event “metaphorically.” pic.twitter.com/320UV0aH0G

Turning Point USA responded to Goldberg’s fictitious claim by issuing a cease and desist letter to ABC News on Tuesday, demanding the company “retract the defamatory statements” made on The View about the TPUSA’s Student Action Summit or face legal action, according to a report by Fox News Digital.

The organization also took to Twitter to point out that “a group of Antifa and left wing protesters showed up, predictably, to protest our event, they eventually dispersed, then minutes later these ‘nazis’ appeared.”

“Who are these people? We have no idea, and apparently ABC and other news media aren’t curious enough to find out,” TPUSA added.

After a group of Antifa and left wing protesters showed up, predictably, to protest our event, they eventually dispersed, then minutes later these “nazis” appeared. Who are these people? We have no idea, and apparently ABC and other news media aren’t curious enough to find out. pic.twitter.com/nPngp64M0F

The identity of the protesters dressed as neo-Nazis remains unclear as most of them had their entire faces concealed.

This reporter was at a restaurant across the street from the event venue when she witnessed about a dozen protesters arrive waving swastika and SS flags. In a similar fashion to Antifa, the protesters were clad in all-black, wearing black balaclava-type headgear and sunglasses, making it virtually impossible to identify their faces.

“We have no idea who they are or why they were at the convention center,” TPUSA said in a statement. “They had nothing to do with TPUSA, our event, or our students.”

“Our students, after initially confronting them, ultimately took the mature route and vacated the space. Once that happened, these individuals left,” the organization added.

Goldberg’s false “neo-Nazi” claims about Turning Point USA come after she was suspended from ABC earlier this year following comments she made about the Holocaust in which The View host falsely stated that the extermination of six million Jews was not about race.