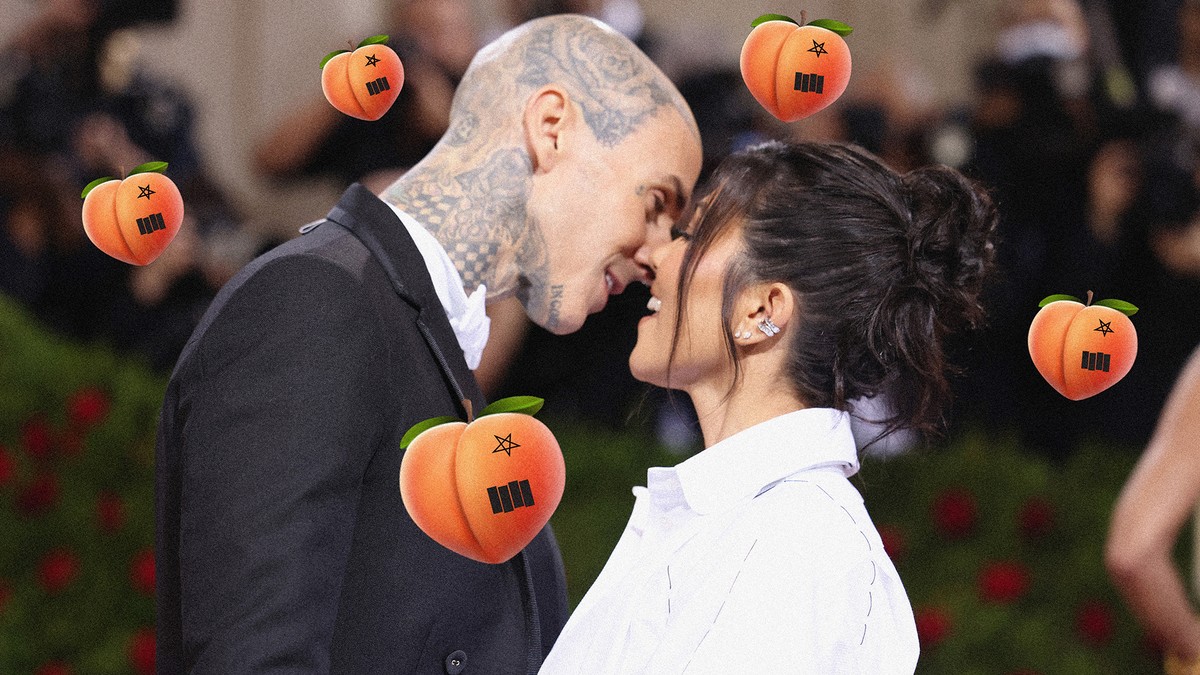 What do you get the man who has everything: a storied career as a rock star, a wife he loves making out with on camera, a “surprisingly tranquil Calabasas abode?” Apparently, you get him what appears to be a charcoal drawing of an ass to put on the walls of said abode, if Blink-182 drummer Travis Barker’s Architectural Digest photoshoot is any indication. The nature of the ass makes it perfect for a famous punk’s home decor. Its Mrs. Incredible–esque proportions, decorated with a star and the Black Flag logo, are—I’m so, so sorry—the exact right balance of sexy and cheeky.

But the drawing also raises an important question: Whose ass is that?

The ass came across my radar before the AD shoot itself did, because my esteemed colleague and noted ass enthusiast (assthusiast?) Rachel Pick tweeted about it here:

While Pick was “transfixed” with what she called a “doodle,” I had a different reaction: deep, ferocious curiosity. Is that… Kourtney’s ass? I thought, and then I hammered the same phrase into a Slack channel where my boss had dropped the tweet. It seemed like the obvious answer, given both the ass-related fame of Kourtney Kardashian, Barker’s paramour, and the aforementioned electrifying sexual chemistry between the two of them.

But a quick look at Kardashian’s Instagram page revealed that her ass, while round and all that jazz, is conspicuously tattoo-free. In short, the artwork wasn’t a direct rendition of her posterior, and the game was afoot.

Though his relationship with Kardashian seems eternal, Barker has in fact been romantically linked to several women in his lifetime, which is obviously normal, especially for a celebrity. Aha!, I thought. These exes might be candidates for ass portrait muse. I am not being derisive when I say that Kardashian and Barker seem super secure in their relationship, so maybe an ass from the past wouldn’t be a problem between them.

Based on an extremely helpful article from PopSugar titled, “All the Women Travis Barker Has Been Linked to Over the Years,” there were six exes in the mix: Melissa Kennedy, Shanna Moakler, Paris Hilton, Tara Conner, Arianny Celeste, and Rita Ora. Off the bat, I felt confident eliminating Kennedy, Barker’s ex-wife, because she’s no longer a public figure, and having a picture of her ass would be messed up. Barker doesn’t seem like that kind of guy. Upon further inspection (that is probably going to really mess up my targeted ads), Moakler, Hilton, Conner, Celeste, and Ora are all varying degrees of tattooed, but none of them sport the exact star/Black Flag combination on that exact butt cheek. (Links are quasi-NSFW, obviously.)

Widening my investigation, a further search into the “famous people ass tattoo” universe didn’t yield any results either—although I did learn that Lea Michele has a Cory Monteith–related tattoo, knowledge that made me tear up a little.

I decided to do what I should have done all along: actually read the Architectural Digest interview where Barker talked about his home—or, at least, do an in-text search for the word “art.” It took approximately five seconds to find out that the artist behind the ass was none other than Raymond Pettibon, who literally designed the Black Flag logo found on T-shirts, forearms, bumper stickers on cool Gen Xers’ cars, and—most pertinently—the ass on the wall.

Finally, I was getting somewhere. I emailed David Zwirner, the world-renowned gallery that represents Pettibon, asking them to ask him who his ass model was, and whether he would please get back to me as soon as possible. Then, I shot an email to Barker’s representatives asking both about the ass identity and whether Barker had even commissioned the piece himself.

I also fired off a quick DM to Kardashian for good measure, because she reposted the specific slide of AD’s Instagram post that showed off the ass art, only to be met with the devastating news that she did not receive my message because she doesn’t “allow new message requests from everyone.” Not even members of the press?

I even did the most demeaning thing a journalist can do: I tweeted at Pettibon from my public account, where all of my crushes and high school acquaintances could see it. He has not, as of yet, responded.

The ass remains unclaimed. I will update this story as soon as humanly possible; for now, the big, juicy mystery abides.