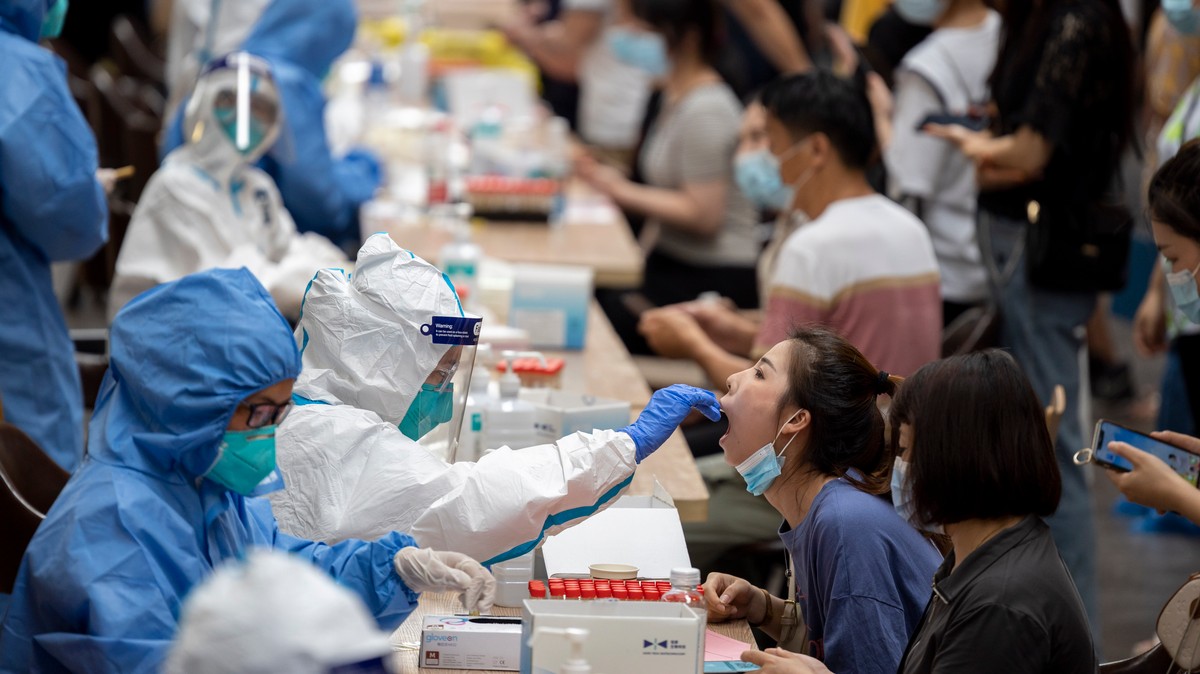 Residents get COVID tests after dozens of cases are detected in the southern city of Guangzhou in May. Photo: Feature China/Barcroft Media via Getty Images

China is committed to keeping its COVID-19 numbers as low as possible with ultra-strict quarantine and contact tracing, which have been credited with saving millions of lives.

China managed to almost eliminate local transmissions of the virus in mid-2020. Since then, the country has relied on strict border controls, citywide lockdowns, and compulsory testing to tackle sporadic outbreaks, at a time when most other countries are shifting to living with COVID-19.

If you test positive in China, you would immediately be isolated along with your close contacts, and even their close contacts. The residential compound you live in could be sealed as residents are ordered into testing. A list of places you’ve been to would be published online to remind potential contacts to get tested. Concerts and gatherings in your city might be canceled to minimize contagion risk.

Despite the disruptions and the resources needed in sustaining the model, Chinese experts have recommended carrying on with the zero-tolerance policy, citing a potential of catastrophic outbreaks if controls are eased.

According to a new study by Peking University researchers, China would report tens of thousands of cases a day if it adopted similar strategies as those of Western countries, even under optimistic assumptions, given its high population density.

The country could record an estimated 637,155 cases daily, more than any other country has ever reported in a day, if it adopted a similar approach as the United States, the study says.

The daily case numbers would be 275,793 and 442,221 if China followed the models of the United Kingdom and Israel respectively, according to the study, published by the Chinese Center for Disease Control and Prevention on Nov. 24 and partly funded by the Bill & Melinda Gates Foundation.

“The number of standing severe cases would exceed the peak number nationwide in early 2020 within 1–2 days,” the authors wrote, “which would have a devastating impact on the medical system of China and cause a great disaster within the nation.”

The study was released two days before the WHO identified the omicron variant of COVID-19 as a new variant of concern. Scientists have since been racing to figure out how the new mutations in the variants might affect the spread of the virus, and governments have reimposed travel restrictions in an attempt to fend off the variant.

Concerns that omicron could be a more contagious variant are likely to give China another reason to stick with its zero-COVID approach.

Xu Wenbo, head of the National Institute for Viral Disease Control and Prevention, told state broadcaster CCTV on Monday night that the country would keep its pandemic measures in place, but it would enhance self-monitoring and testing for some high-risk jobs, such as those in hotels associated with imported cases.

The Chinese people have painful memories of the early days of the COVID-19 pandemic. After the disease was first reported in the central city of Wuhan, a surging number of patients overwhelmed the medical system in the region. Patients had to plead for hospital beds on social media, while doctors and nurses made their own protective gear from plastic folders.

Since the epidemic was contained in the country, state media have been reporting on how people suffer under the West’s coexistence strategy to drum up support for China’s success.

The zero-tolerance strategy enjoys strong support in China, despite occasional disruptive lockdowns and people’s inability to travel abroad. The overwhelming majority of Chinese citizens do not own a passport, and probably have no plans to travel anyway.

Wu Zunyou, chief epidemiologist at China’s CDC, said at a Caijing magazine conference on Sunday that the zero-tolerance strategy was the most effective way to combat COVID-19, and the country should stick to it, at least till the coming Spring, to ensure most people’s lives can go on normally.

Wu said the country could count on its usual control measures to fend off potential threats from the omicron variant. He said 3 million Chinese people, instead of the current official death toll of 4,636, could die from COVID-19 if the country has the same infection and fatality rates as the UK and the U.S.

China has become one of the last places to maintain a zero-COVID strategy after countries such as New Zealand, Singapore, and Australia abandoned their zero tolerance policies in favor of coexistence.

But some countries are putting back border controls in light of the omicron variant. Israel shut its borders on Sunday, while Japan closed its borders to foreigners from Tuesday. The Australian government said it would review plans to reopen its borders to skilled migrants and students in December.