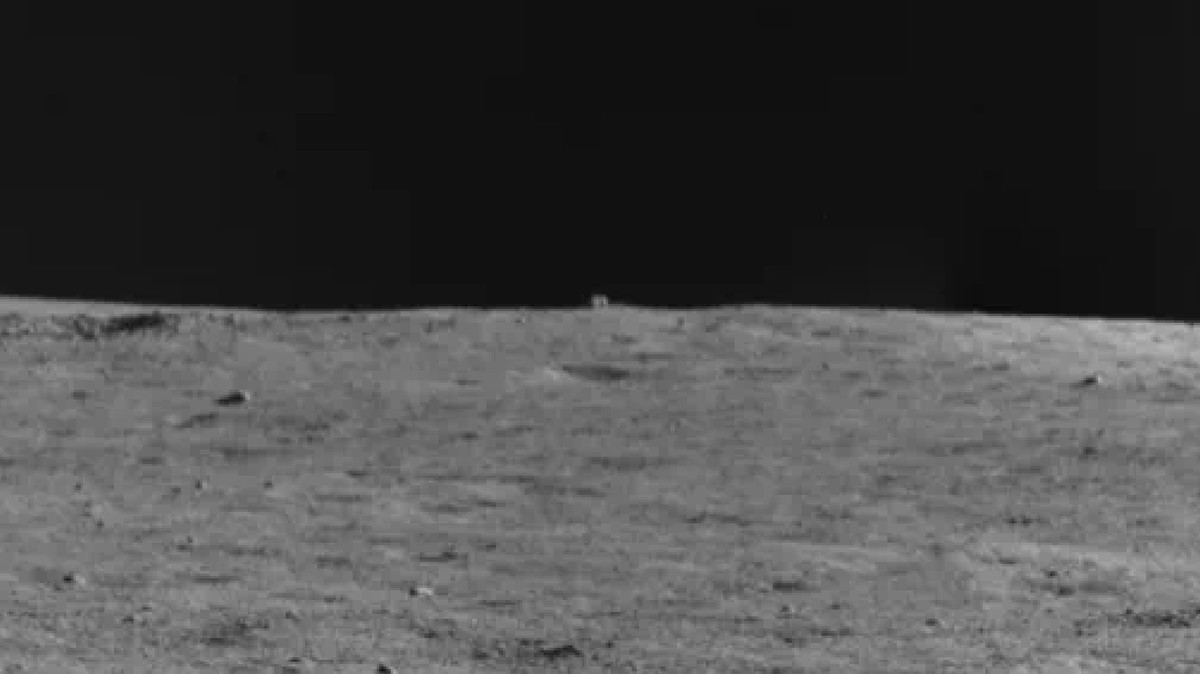 A cube-shaped object on the far side of the moon has inspired speculations. Photo: Our Space

A mysterious “moon cube” spotted by a Chinese rover on the far side of the moon has dazzled the internet. And it could take months for the rover to find out what the weird-looking object really is.

The Chinese lunar rover has captured an image of a cube-shaped object on the horizon about 80 meters (about 262 feet) away from its location, said Our Space, a state-run science outlet, which called it a “mysterious hut” in the rover’s latest travel log on Dec. 3. The post has inspired all kinds of speculation and memes, with social media users calling it an alien home, an outdoor toilet, and a COVID-19 testing station.

Although the cube is likely just some rocks, the travel log said it would take two to three lunar days, or two to three months on Earth, for the rover to take a close look at it.

So why does it take so long?

Yutu-2, or “Jade Rabbit-2,” became the first rover to land on the far side of the moon (the hemisphere that faces away from Earth) in 2019. Like many other space rovers, it moves very slowly under stringent control by scientists on Earth.

First, the rover spent more than half of its lifetime dormant. The temperature during the lunar night, which lasts about 14 Earth days, could dip to -292 degrees Fahrenheit (-180 degrees Celsius), making it too cold for the robot to operate. The device also needs to “take naps” when it becomes too hot.

Route of the Yutu-2 rover in its first 35 lunar days. Photo: Our Space

The wheeled robot has a designed maximum speed of 200 meters per hour, or 5.6 centimeters per second or 0.12 miles per hour. But in reality, it does not just stride straight ahead at full speed. According to the travel logs published by Our Space, engineers have been making careful calculations for every step the rover takes.

They need to help the rover avoid the ubiquitous small craters on the lunar surface, make sure it does not slide down a slope, and guide it toward an ideal resting spot before night falls. The rover also needs to make occasional stops to conduct scientific research.

Space engineers refer to images of the lunar surface taken by a satellite probe to map out the rover’s long-term routes, while pictures captured by the rover’s own cameras are used to design the rover’s short-term movements.

Engineers build 3D models with the pictures, and work out the rover’s next steps based on the geological features of a particular location as well as the robot’s communications and energy conditions, according to Our Space travel logs.

Before the rover sets out, its moves are first rehearsed on the computer. Following every step, engineers would analyze data from the new location to make sure it is on the right track. The mechanism is aimed at protecting the rover from any accidents that could stop it from functioning.

Because of the complicated navigation process, the rover has not traveled too far since it arrived in the Von Karman Crater in the South Pole-Aitken Basin in January 2019. By the end of September, when the rover reached the milestone of 1,000 days of operation, it had made 170 moves and covered a distance of 839 meters (2,752 feet), according to Our Space.

Rovers equipped with self-driving systems are able to move faster. China’s Zhurong Mars rover, which is able to identify obstacles by itself, has traveled 1,000 meters within 100 martian days (103 Earth days), the government said.

An enhanced auto-navigation system on NASA’s Perseverance Mars rover could enable it to move at 393 feet (120 meters) per hour. In comparison, the Opportunity Mars rover traveled 28 miles in its 14 years’ lifespan, or an average of about 880 feet per month.