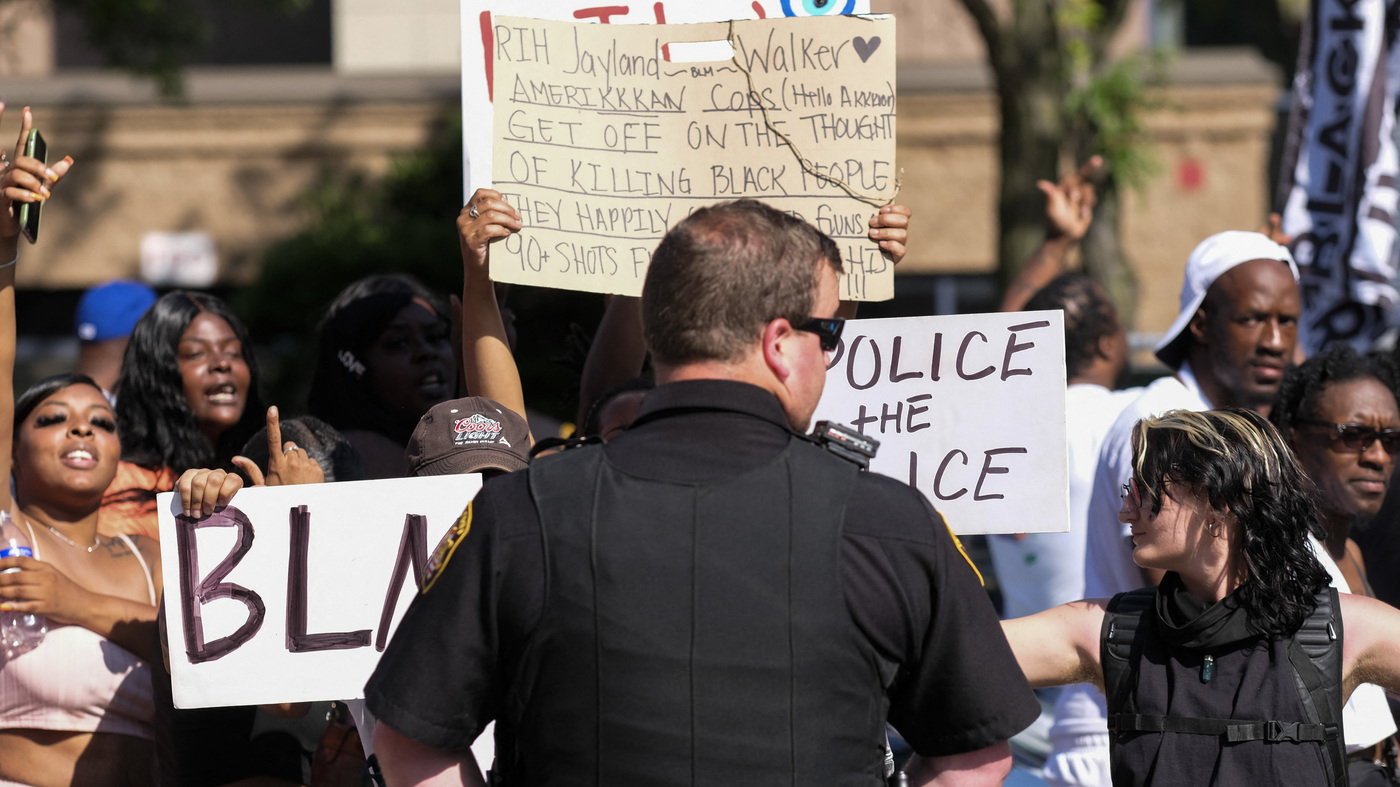 Demonstrators standoff with officers outside Akron City Hall on Sunday as they protest the fatal police shooting of Jayland Walker.

Demonstrators standoff with officers outside Akron City Hall on Sunday as they protest the fatal police shooting of Jayland Walker.

Jayland Walker, a 25-year-old Black man who was unarmed at the time he was killed by police in Akron, Ohio, last week, was shot at least 60 times, authorities said over the weekend, when they released body camera footage of the shooting.

The sheer number of bullets that were fired by as many as eight officers involved in the shooting has prompted renewed questions from politicians and activists who are criticizing what they view as excessive use of force by police.

Law enforcement and experts in police law who have viewed body cam footage of the shooting say that the officers’ response reflects standard police training.

“Officers are trained to shoot until the threat they perceive, and or reasonably believe is present, has ended,” said Lance LoRusso, a lawyer who specializes in use-of-force cases.

But other experts warn that the U.S. police training lags behind other countries when it comes to including the psychological and physiological aspects of use-of force.

Police shoot until the perceived threat no longer exists

Stephen Mylett, the Akron police chief, said as much at Sunday’s news conference, when he fielded questions about whether there are police protocols in place for situations in which multiple officers are firing at a suspect and how many bullets should be fired.

While the investigation into the shooting is still ongoing, Mylett said officers independently related that they did perceive such a threat.

What began as a routine traffic stop turned into a public safety issue, police said, when a shot appeared to have been fired from Walker’s vehicle during the pursuit. Although authorities said that Walker left his gun behind when exited his car to flee on foot, officers said that — after unsuccessful attempt to use tasers — they feared the suspect was preparing to shoot when they fired their weapons.

Mylett said he didn’t know how many shots were fired at Walker, but he said he expected the number would be “high.”

Legally, the number of shots doesn’t matter in such cases, LoRusso noted. The U.S. Supreme Court has agreed that, under the Fourth Amendment, “if officers are justified in firing at a suspect in order to end a severe threat to public safety, they need not stop shooting until the threat has ended.” It’s up to courts to decide whether the officers’ assessment of the threat was reasonable.

Police are not trained to shoot to wound

A high number of bullets and the deadly outcomes that often result from use-of-force scenarios boils down to marksmanship, says Edward Obayashi, the deputy sheriff of Plumas County, Calif.

“Despite what Hollywood portrays, like Lethal Weapon, Dirty Harry and all these other movies and television shows, there is no cop out there that even comes close to that type of shooting skill,” Obayashi said.

Add to that a moving target, poorly lit environments and rapidly evolving circumstances, LoRusso says, “aiming at the largest target available is the safest method to avoid hitting unintended targets.”

Legally speaking, the lawyer says, there’s no difference between shooting a suspect in the thigh as opposed to the chest.

“The shooting of a person, in any body part, is the same level of force — deadly force — and must be justified under state law,” he said, adding that either shot carries the same degree of risk of “serious bodily injury or death,” which is the standard to justify the use of deadly force.

Under stress, the human body doesn’t know right from wrong

Many officers today are armed with semiautomatic weapons that are able to discharge an entire magazine — usually about 15 or 17 rounds — within seconds, said Obayashi, who also works as a use-of-force consultant to law enforcement agencies.

That means an unwarranted number of bullets may be fired in quick succession by the time an officer realizes it’s time to stop firing, he said.

“It’s going to take another period of time for your vision to then transmit a signal to the brain saying, ‘Oh, OK, the threat is over. I’m going to stop firing.'”

“Unfortunately, the adrenaline, the stress, they take over and it cannot be just clinically explained in terms of what’s right and what’s wrong,” she said.

One of the physiological effects of the stress is the inability to see properly, she said.

“Peripheral vision is impaired up to 70%,” she said, “which basically impacts the perception of how many bullets actually hit the suspect. So they really don’t know if they hit the target.”

Add multiple officers to the fold, and the number of bullets discharged increases exponentially.

Haberfeld says that, generally speaking, police training in the U.S. is behind some other countries when it comes to addressing the physiological components in use-of-force situations.

While proper use of force can be taught to officers in about 17 weeks, she said, “this is something that requires months upon months of training, and they simply are not getting it.”

Haberfeld says she’s spent much time studying European police forces, training universities and academies. Finland and Norway, she said, are exemplary models that offer three to four years of trainings that include, “not just the tactical use, it’s also the psychological, the emotional aspects of use of force.”