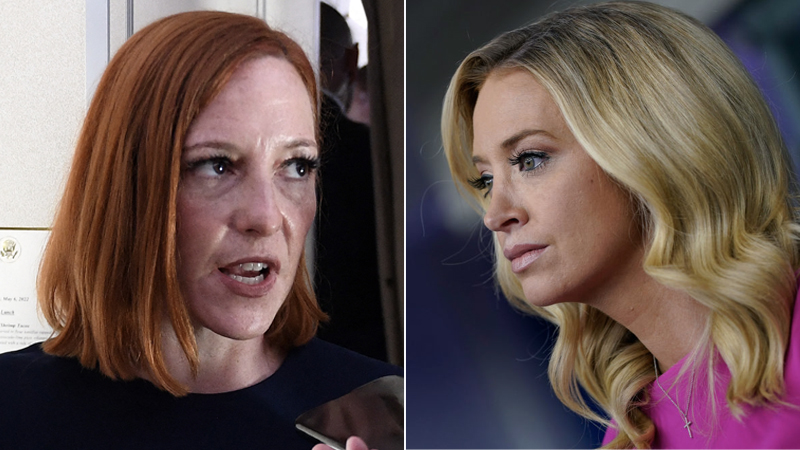 Appearing on “The Five” Friday, McEnany pointed to a question Psaki received during her last press conference about whether the Biden administration wanted protesters to “influence” the Justices so that they uphold Roe v Wade.

“Which basically, that question verbatim is a crime if you look at U.S. Code to influence a Justice by protesting at their home,” McEnany said. “Her response was this: ‘I wouldn’t say the president has as particular view on this.’”

She reiterated her point in another appearance on “Outnumbered” on Friday:

“I didn’t think I’d see a day from the White House podium illegal activity was condoned. And make no mistake, that’s what we heard yesterday with the refusal to call off the protests at people’s homes,” she said.

Whoever, with the intent of interfering with, obstructing, or impeding the administration of justice, or with the intent of influencing any judge, juror, witness, or court officer, in the discharge of his duty, pickets or parades in or near a building housing a court of the United States, or in or near a building or residence occupied or used by such judge, juror, witness, or court officer, or with such intent uses any sound-truck or similar device or resorts to any other demonstration in or near any such building or residence, shall be fined under this title or imprisoned not more than one year, or both.

Psaki similarly refused to weigh in on the criminal leak of the SCOTUS draft decision overturning Roe v Wade earlier this week, instead calling the question a “distraction” from the “fundamental” right to have an abortion.

“The president, for all those women, men, others who feel outraged, who feel scared, who feel concerned, he hears them, he shares that concern and that horror that he saw in that draft opinion,” Psaki said Thursday.

A far-left group called “Ruth Sent Us” announced plans to protest outside the private residences of “six extremist Justices” next Wednesday, even releasing a map pinpointing their homes.

“At the homes of the six extremist justices, three in Virginia and three in Maryland. If you’d like to join or lead a peaceful protest, let us know,” the group says on its website.

Broader protests are also kicking off on Sunday at Catholic churches across the country, dubbed the “Mother’s Day strike”, against the Supreme Court draft decision.

Whether you’re a “Catholic for Choice”, ex-Catholic, of other or no faith, recognize that six extremist Catholics set out to overturn Roe. Stand at or in a local Catholic Church Sun May 8. #WarOnWomen #MothersDayStrike pic.twitter.com/v2vtpd12Gp