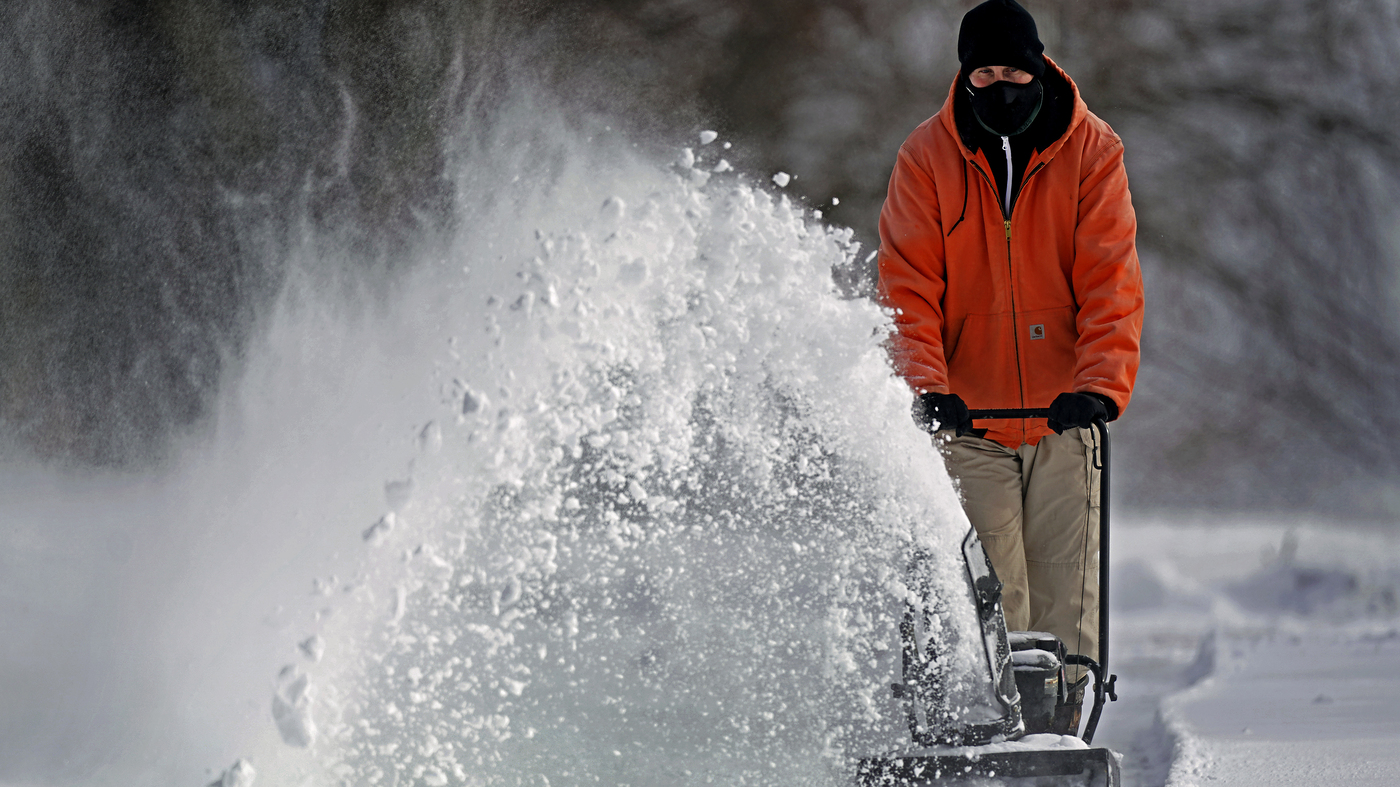 John Tapko clears snow at his house Wednesday in Overland Park, Kan. A major winter storm with millions of Americans in its path brought a mix of rain, freezing rain and snow to the middle section of the U.S. as airlines canceled hundreds of flights, governors urged residents to stay off roads and schools closed.

John Tapko clears snow at his house Wednesday in Overland Park, Kan. A major winter storm with millions of Americans in its path brought a mix of rain, freezing rain and snow to the middle section of the U.S. as airlines canceled hundreds of flights, governors urged residents to stay off roads and schools closed.

A major winter storm with millions of Americans in its path brought a mix of rain, freezing rain and snow to the central U.S. as airlines canceled thousands of flights, officials urged residents to stay off roads and schools closed campuses.

By midday Wednesday, some places had already reported snow totals exceeding or nearing a foot, including the central Illinois town of Lewistown with 14.4 inches (36.6 centimeters) and the northeastern Missouri city of Hannibal with 11.5 inches (29.2 centimeters).

“And it’s still snowing across these areas,” said Andrew Orrison, a meteorologist with the National Weather Service in College Park, Maryland.

Central Illinois and northern Indiana appeared likely to receive the most snowfall, with expected totals ranging from 12 to 18 inches (30 to 45 centimeters) by the end of Thursday, Orrison said.

Snow had begun to taper off in Missouri by early afternoon but much of the state could wind up with 8 inches to a foot (20 to 30 centimeters) of snow. Parts of Michigan also could snow totals around a foot by Thursday.

In Chicago, Elisha Waldman and his sons welcomed the opportunity to hit a sledding hill Wednesday morning, even as snow continued to fall.

“Cold and wet and wonderful, and getting cold and wet is part of the fun with the guys, and we get to go inside and have hot cocoa and warm up,” Waldman said.

In Detroit’s western suburbs, Tony Haley also found an advantage to the weather. He owns a landscaping and irrigation company that offers snow removal and salting services, but the early winter weeks offered few opportunities for business.

“This one here, we’re looking for a good two, three days of work,” Haley said after clearing snow away from several businesses in Canton.

But for those on the roads, the heavy snow created hazardous conditions.

In central Missouri, officials shut down part of Interstate 70 midday after a crash made the roadway impassable.

Areas south of the heavy snow were expected to see freezing rain, with the heaviest ice predicted along the lower Ohio Valley area from Louisville, Kentucky, to Memphis, Tennessee.

“If everything holds to where it is right now, this is the real deal,” said Kentucky Gov. Andy Beshear, who ordered state government offices to close on Thursday. “It is dangerous. People need to be prepared.”

The disruptive storm moved across the central U.S. on Groundhog Day, the same day the famed groundhog Punxsutawney Phil predicted six more weeks of winter. The storm came on the heels of a nor’easter last weekend that brought blizzard conditions to many parts of the East Coast.

The storm’s path extended as far south as Texas, nearly a year after a catastrophic freeze buckled the state’s power grid in one of the worst blackouts in U.S. history. The forecast did not call for the same prolonged and frigid temperatures as the February 2021 storm, and the National Weather Service said the system would, generally, not be as bad this time for Texas.

Early Thursday morning there were over 46,000 power outages being reported in Texas and over 17,000 in Oklahoma, according to poweroutage.us.

Snowfall totals reached 22 inches (56 centimeters) in Colorado Springs and up to 10 inches (25 centimeters) in the Denver area, with more expected, prompting universities, state government offices and the Legislature to shut down.

Airlines canceled nearly 8,000 flights in the U.S. scheduled for Wednesday or Thursday, the flight-tracking service FlightAware.com showed. Airports in St. Louis, Chicago, Kansas City and Detroit canceled more flights than usual. Almost 700 flights were canceled Thursday alone at Dallas-Fort Worth International Airport, and more than 300 were canceled at nearby Dallas Love Field.

In an effort to stay ahead of the weather, Southwest Airlines announced Tuesday that it would suspend all of its flight operations Wednesday at St. Louis Lambert International Airport and Thursday at its Dallas Love Field hub.

National Weather Service forecasters in Little Rock put their own spin on the Groundhog Day tradition with a photo of their office cat, Tarmac, and the caption: “SHADOWS EVERYWHERE! THE WINTER STORM IS HAPPENING!”