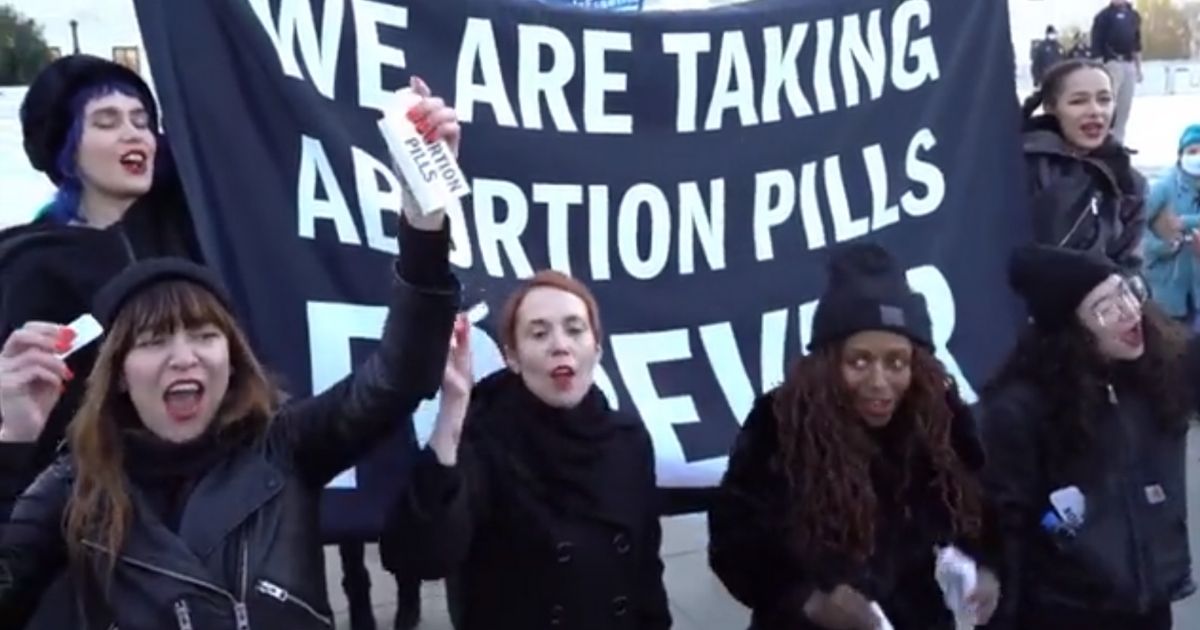 For the folks who seek to normalize abortion as just another medical procedure, this approach does nothing but expose that lie.

While demonstrating outside of the U.S. Supreme Court on Wednesday during opening arguments of a case that poses a direct challenge to the court’s Roe v. Wade decision legalizing abortion, a handful of female protestors were cheered on as they swallowed tablets that were purportedly abortion pills.

“ABORTION PILLS ARE IN OUR HANDS & WE WON’T STOP 🖤,” a tweet from Shout Your Abortion captioned a video clip from Wednesday’s protest.

“Taking Mifepristone at the Supreme Court today,” the post concluded, along with the hashtag #AbortionPillsForever.

ABORTION PILLS ARE IN OUR HANDS & WE WON’T STOP 🖤. Taking Mifepristone at the Supreme Court today. #AbortionPillsForever pic.twitter.com/NI0twbRjpN

The short video featured four young women standing in front of a banner that said “WE ARE TAKING ABORTION PILLS FOREVER” as they fumbled with small white boxes labeled “abortion pills” with large black block letters.

After several chants of their slogan, the women in frame popped small tablets into their mouths and sipped from water bottles in either a moment of symbolic triumph — or in a demonic public act of child sacrifice.

If these women were indeed pregnant and the tablets were genuine mifepristone, what we have witnessed is the moment they carried out a death sentence against their own babies as a means of protesting a court case that could restrict such crimes against humanity.

The reaction on social media was a mix of disgust, astonishment and sobering realizations about the evil of abortion.

DEATH CULT: Ecstatic pro-baby murder activists take abortion pills in jubilation outside SCOTUS in DC in front of a banner that says “we are taking abortion pills FOREVER.”

This is what a death cult looks Iike

‘We are taking abortion pills FOREVER’ is what they’re screaming.

These women are not well. #RoeVWade #ProLife #SCOTUS #Mississippi https://t.co/ofd6Kurd3Q

The people trying to force you to take 4 covid injections forever are the same ones “taking abortion pills forever” https://t.co/9NeR2004jg

Feminists take abortion pills outside the Supreme Court to kill their babies in a disgusting publicity stunt.

Contrary to feminist memes and mantras, abortion is not routine health care that is necessary to save women’s lives. If it were, there would be no need for such a public display or a concerted campaign to “normalize” it.

Instead, abortion is the most sickening and barbaric act of depravity a mother can inflict on her own offspring, a fact that makes people instinctively recoil from the very idea of it despite decades of trying to turn it into a women’s rights issue.

But the supposed right to end the life of an unborn child is the defining evil of our time, more insidious than mass extinctions that took place under totalitarianism, communism or Nazism.

Concentration camps and killing fields full of corpses drew the kind of public attention and disgust that eventually mobilized the forces of good to make it all stop.

Are you hopeful that Roe v. Wade will be overturned?

But abortion happens in sterile clinical settings where the corpses are carted away and disposed of as medical waste or, as these women may soon find out, in the lonely privacy of bathrooms in office buildings, homes and college dormitories.

It has remained a mostly unseen atrocity and has therefore survived challenges as the de facto law of the land ever since the Roe v. Wade decision in 1973 — but that may be about to change.

Experts believe that because the ban would take effect before the currently accepted age of viability — one of the pillars of the Roe decision to allow abortions before 24 weeks — it could undermine the entire premise on which the right to abortion is currently hinged if the court finds the Mississippi law constitutional.

The balance of so-called conservative justices might be enough to overturn the Roe decision, which would go down in history as another awful precedent.

Pro-lifers are hopeful, while pro-abortion advocates are desperate to maintain the evil practice that has become the high sacrament in the church of woke.

That desperation is what brought these women to the Supreme Court and was the impetus for their macabre publicity stunt that potentially ended the lives of their own children — and that tells us all we need to know about proponents of abortion.