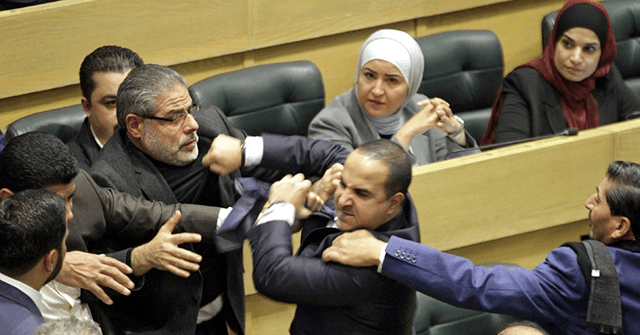 A fistfight broke out in the Jordanian parliament on Tuesday during a debate over amending the national constitution to strengthen equal rights for women.

Specifically, reformers supported by King Abdullah II want to add female nouns to a clause that would clearly state both men and women have the same nationality and citizenship rights.

Several deputies traded punches in a brawl in Jordan’s parliament after a verbal row escalated when the assembly speaker called on a deputy to leave, witnesses said https://t.co/4WVq2L1Div pic.twitter.com/RqA04SZHeY

The background for the parliamentary brawl was a bit more complicated than just fighting over the explicit addition of women to the array of Jordanian constitutional protections.

Opposition legislators accuse King Abdullah of pushing changes into the 1952 constitution to increase the power of the monarchy, under the guise of implementing modernist reforms that will make Jordan more appealing to foreign travelers and investors.

Some international observers note with suspicion that Abdullah’s push for “progressive” reforms is happening at the same time Jordan grows noticeably more authoritarian.

Freedom House, for example, downgraded Jordan from “Partly Free” to “Not Free” in the 2021 edition of its Freedom in the World report, in part due to emergency powers asserted by the government during the Wuhan coronavirus pandemic. The pandemic was also blamed for a somewhat dodgy election that left the legislature more stacked than ever with Abdullah loyalists, and it was stacked to begin with, since the king directly appoints many of the legislators.

Unfortunately from the Western perspective, the Jordanian opposition includes a large number of Islamists and tribal leaders who could be less interested in liberalization than King Abdullah, should Jordan become more of a limited constitutional monarchy. An Arab Spring-style outbreak of greater political freedom leading to even more illiberal government is a distinct possibility.

In many ways, the situation in Jordan resembles that of Saudi Arabia, where de facto ruler Crown Prince Mohammed bin Salman entered the public stage with a package of ambitious reforms to modernize the kingdom and reduce its dependence on the oil trade – and was subsequently criticized for using authoritarian tactics to implement his reforms, consolidate his power, destroy his adversaries, and stifle dissent.

The parliamentary debate over constitutional reform has been acrimonious ever since it began in November, when opposition leaders accused the king and his allies of plotting a “coup against the Jordanian constitution.”

On Tuesday, the parliament came to blows when lawmaker Abdulmunim Oddat defended amending the constitution so both men and women receive full and equal citizenship rights. Oddat said the change would merely create “linguistic equality” and correct outmoded linguistics from the 1950s.

While some hardline Islamists object to this change on religious and cultural grounds, more measured critics note that it would have significant repercussions for Jordan’s inheritance laws, which are based on Muslim sharia law and stipulate much larger shares for male heirs. Also, under current Jordanian law, men can confer Jordanian citizenship onto their wives and children, but women cannot do the same when they marry non-Jordanian men.

A heated argument broke out between lawmakers and soon escalated into punching, slapping, and grappling, plus some language described as “blasphemous” by witnesses – of which there were quite a few, because the debate was carried live on Jordanian television:

The brawl ended when Parliament speaker Abdelkarim al-Daghmi stormed out of the chamber and the legislative session was adjourned.