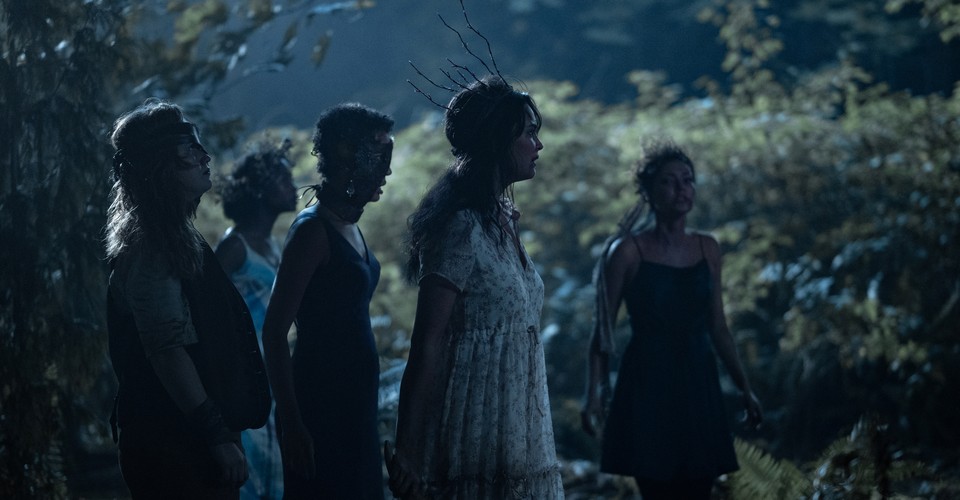 Yellowjackets, the Showtime series about a high-school girls’ soccer team stranded in the wilderness after a plane crash, can be extremely stressful to watch. The drama, which ended its first season tonight and has been renewed for a second, is relentlessly violent, and the writers seem to delight in attacking or killing off the most lovable characters. The aggressively knotty narrative braids together two timelines: One, set in 1996, follows the squad after the accident and involves drug-induced visions, a close encounter with a bear, and—eventually, per a flash-forward—a cannibalistic cult led by a masked character wearing antlers on her head. The other, set in the present day, tracks the survivors as middle-aged adults who get targeted by a blackmailer. At times, Yellowjackets’ many preposterous story beats have risked derailing the show.

Yet the series has kept a vice grip on my mind since it began airing in November, and not only because I’ve been itching to see whether my theory about the identity of the antlered cult leader would turn out to be correct. Like other shows that filter the high-school experience through a dark, often bloody lens (Euphoria and Pretty Little Liars come to mind), Yellowjackets frames the coming-of-age journey as a psychological horror. But unlike those dramas, it gleefully takes the idea to the extreme, mixing supernatural elements and pitch-black humor into an already pulpy premise. In this stew of hormones, gore, and mordant farce, the series captures the way that growing out of girlhood is an inherently brutal and absurd process.

Despite comparisons to Lord of the Flies and Lost, Yellowjackets quickly moves past the survival framework. Soon after the crash, the team finds a freshwater lake, a cabin that provides suitable shelter, and ample game to hunt. Given the present-day timeline, the question isn’t whether the survivors will be rescued; it’s how exactly their fragile interpersonal relationships will change during their 19 months in the woods. The mere fact that they’re stranded shuffles the team’s pecking order. Misty (played by Samantha Hanratty), the friendless equipment manager, finds herself newly essential because she has basic medical skills. In contrast, the team captain, Jackie (Ella Purnell), was popular in the halls of their high school but now struggles to find her place in the group. The instability of the Yellowjackets’ hierarchy is scarier than anything they might encounter in the woods, making clear how the team’s camaraderie could morph into something as feral as a cannibalistic cult.

Consider Jackie’s fate in the Season 1 finale, for example. She has a fight with her best friend, Shauna (Sophie Nélisse), during which none of the Yellowjackets dares to intervene, and ends up sleeping outside the cabin. Jackie then dreams about making up with Shauna, and the rest of the team reassuring her she’s loved—until the show reveals that she died overnight after a blizzard unexpectedly set in. In other words, the girl who got iced out of the squad she once led wound up freezing to death.

The development is dramatic and unsubtle, but that’s what makes Yellowjackets such a refreshing and compelling watch. To teenage girls, negotiating friendships can feel like a matter of life or death, and the show treats their concerns with obvious sympathy. It does the same for its characters’ personal insecurities: After months in the wilderness, Jackie worries about the prospect of dying without losing her virginity first. Van (Liv Hewson), who survives being mauled by a wolf, admits that she’s afraid to be seen with so many scars on her face.

Such anxieties may sound foolish to some viewers, but Yellowjackets doesn’t think they are; the series leans into the drama that heightens every facet of girlhood. Sometimes, the show aims simply for sardonic laughs. In one episode, the entire team’s periods sync up—and anyone who knows the pain of cramps can appreciate the agony of going without heating pads and Midol. Most of the time, however, the series grounds its twists (especially the goriest and most tragic ones) in realistic teenage desires, the chief of which is to fit in. Taissa (Jasmin Savoy Brown) wants to be seen as a leader, but her quest to prove herself by leading some of the squad on a hike out of the woods ends in disaster. Misty destroys the flight recorder, and a chance at being saved, because she’s afraid of returning to being bullied in high school.

Read: The unending assaults on girlhood

In an interview, one of the series’ co-creators, Ashley Lyle, explained that she was inspired to write the show after reading comments about how a female version of Lord of the Flies would never work, because girls could never be as barbaric as boys. But Yellowjackets argues that the barbarism of girlhood is something more complex than many people are willing to admit. Its characters are more than capable of physical violence, as well as a precise form of emotional undoing, against themselves and against one another.

The show’s heavy focus on the earlier timeline means that, despite scene-chewing performances from the adult cast, the present-day events can feel like an afterthought, especially the blackmail plot. Still, the glimpses of the Yellowjackets as middle-aged women emphasize how the trauma of their time in the woods lingers. The casting of ’90s teen idols such as Melanie Lynskey, Christina Ricci, and Juliette Lewis underlines, on a meta level, the way their characters remain tethered to the versions of themselves from decades ago, insecurities and all. Late in the finale, for instance, Shauna pauses before going inside the high-school reunion she and her fellow Yellowjackets have agreed to attend. “How is it possible this is the most scared I’ve been all day?” she asks. Because, Yellowjackets makes plain, the growing pains of girlhood can leave the kinds of scars that are invisible yet never fade.